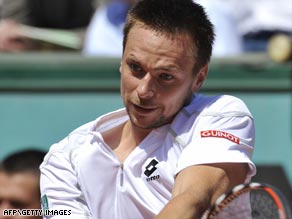 Robin Soderling is the first Swede to reach the French Open semifinals since his coach Magnus Norman in 2000.

The 23rd-seeded Soderling had inflicted a first Roland Garros defeat on four-time defending champion Rafael Nadal in the previous round and was equally impressive as he saw off his Russian rival.

Some doubted whether the 24-year-old could give a repeat performance, but he did just that with another masterclass of mighty groundstrokes to triumph in one hour and 41 minutes.

"You expect a tougher match in the quarterfinals of a Grand Slam, but it wasn't as easy as the scoreline suggested.

"I always knew I could play really, really good tennis when I'm on top of my game. But what I'm happiest about is that I've played well for many matches in a row, which was maybe missing a few years ago."

Murray could not sustain the excellent form of previous rounds while Gonzalez recovered from a dip in the second set -- the first he had dropped in the tournament -- to overpower his rival through sheer brute force.

Scotland's Murray won just seven points in the third and he was always on the back foot in what proved to be the final set.

He recovered from 15-30 deficits in games four and six to stay level, but was broken in the eighth when Gonzalez unleashed a huge forehand, his 45th winner of the match.

Gonzalez was broken himself when serving for the set at 5-3 but Murray could not back that up, ending the championship by being broken to love.

Soderling raced through the first set against Davydenko, breaking his opponent twice to wrap it up in just 23 minutes.

The second was a much tighter affair with the first six games going with serve before Soderling took control against a player he had beaten in three of their five previous meetings including both times on clay.

He broke the world number 11 in game seven; survived a double fault in a hard-fought game to consolidate at 5-3 and then rounded off the set with a second break.

Davydenko had also claimed an impressive victory on Sunday, seeing off eighth seed Fernando Verdasco but was completely outplayed in his quarterfinal clash.

He hardly got a look-in in the third set and took only one more game in the match leaving Soderling to celebrate becoming the first Swedish French Open semifinalist since his coach Magnus Norman in 2000.

Soderling said he had received a congratulatory text from Bjorn Borg after his win over Nadal, who last year equalled the legendary Swede's record of four straight Roland Garros titles.

"He said, 'Congratulations, and thank you for not letting Nadal break my record'.

Davydenko was understandably disappointed saying: "I don't know why but it's three times I've lost against him before.

"I didn't have my best game and that's surprising," said a disappointed Davydenko. "Maybe his tennis is too fast for me. He had very good control from the baseline."