(CNN) -- Top seed Dinara Safina battled from a set down to defeat Belarusian teenager Victoria Azarenka at the French Open, but there was no escape for scheduled semifinal opponent Maria Sharapova who suffered a humiliating exit. 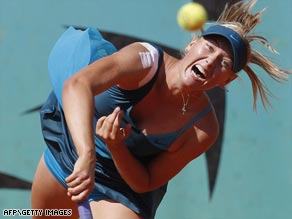 Sharapova bowed out of the French Open after suffering one of her worst career defeats.

Sharapova was thrashed 6-0 6-2 by Slovakia's Dominika Cibulkova in her last-eight match on Tuesday while fellow Russian Safina overcame 19-year-old Azarenka 1-6 6-4 6-2.

It could have worse for former world number one Sharapova as Cibulkova had a match point to mark her first Grand Slam quarterfinal by dishing out the dreaded double bagel.

Sharapova survived and she saved three more match points in the 12th game of the second set before her resistance crumbled completely with a netted forehand.

It was her heaviest loss since she went down 6-1 6-1 to Serena Williams in the fourth round in Miami in 2007.

Sharapova, playing only her second tournament since a 10-month lay-off because of a shoulder injury, was bidding to reach her second semifinal following a run to the 2007 last four.

The Russian star, whose ranking slumped to 104 in the world during her time off the tour, had won both her previous matches against the pint-sized, 20-year-old Cibulkova and both were on clay.

But Cibulkova was in complete control, breaking in the first, third and fifth games of the opening set.

The Slovakian was then quickly 1-0 ahead before receiving a code violation for taking too long between points.

It did not throw her off her stride and she was soon flat out on the dirt surface of Court Suzanne Lenglen in celebration.

Safina was given the runaround in the first set and was at one stage being held at 4-4 in the second, but recovered her poise on Philippe Chatrier court.

Ninth seed Azarenka had beaten Safina at Indian Wells earlier this year and had also won three titles in 2009, in Brisbane, Memphis and Miami.

She played an almost perfect first set in just 23 minutes, but Safina then found the form that had seen her lose just five games in her run to the quarters opening a 4-1 lead in the second.

Azarenka fought back to make it 4-4 but Safina rallied again to take the set -- and break in the opening game of the third.

World number one Safina, who has yet to win a grand slam, finished the stronger to wrap up victory in an hour and 52 minutes.

"I just didn't take the chances I had," said Azarenka. "Shedefinitely stepped it up and played some good points at key moments, which I have to give her credit for. It's all experience. Hopefully I'll do better next time."