(CNN) -- World heavyweight boxing champion Wladimir Klitschko was left frustrated on Wednesday when Briton David Haye pulled out of their June 20 title clash after suffering an injury in training. 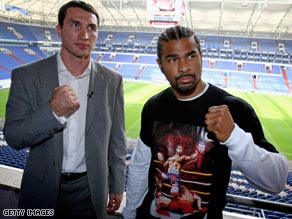 Briton Haye, right, has withdrawn from their his clash with Klitschko after suffering an injury in training.

The 28-year-old Haye was scheduled to challenge for Ukrainian Klitschko's IBF, WBO and IBO belts before a sell-out 60,000 crowd at FC Schalke's Veltins-Arena in Germany.

"I'm pretty frustrated right now. I've been waiting for this David Haye fight for half a year," Klitschko told Setanta Sports News. "But now I have no David Haye on June 20, so we'll keep the date and I wish a fast recovery to him.

"So now I have no opponent and will look for somebody else. I wish David Haye a fast recovery."

Londoner Haye suffered the injury in Cyprus and he will consult an independent specialist next week to determine when the fight can be re-scheduled.

Klitschko refused to question the validity of Haye's injury. "I would not throw garbage at a person who is on the floor, which would probably not be the case if this was the other way round," he said.

If it is a relatively minor problem, fans may not have to wait long to see Haye's attempt to become Britain's first heavyweight world champion since Lennox Lewis retired in 2003.

Klitschko's manager Bernd Boente believes the fight could even be rescheduled for late July, while an alternative option is for the 33-year-old to face a new opponent on June 20.

"Contractually we have to first of all see how bad the injury is," he said. "If there is just a small postponement, maybe we could do the fight four weeks later.

"We have put a lot of training into the fight but we will have to see. The first question they have to answer is when will they be ready again?"

Haye had attracted criticism for his controversial behaviour as he first sought to secure the fight and then promote it.

He attended media events wearing a T-shirt depicting him holding aloft the severed heads of Wladimir and his elder brother Vitali.

Renaming Klitschko as "Bitchko", he also derided the giant Ukrainian as an embarrassment to boxing and rubbished his record.

The giant Ukrainian would have been Haye's third opponent as a heavyweight having already stopped Tomasz Bonin and Monte Barrett.

Haye, who has a record of 22 wins from 23 fights with all but one coming inside the distance, stepped up in division after unifying the cruiserweights with a second-round demolition of Enzo Maccarinelli in March 2008.