(CNN) -- The British and Irish Lions sent a firm message to hosts South Africa after running in 10 tries in a 74-10 demolition of the Golden Lions in Johannesburg. 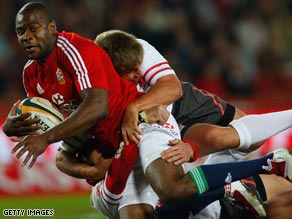 There were five tries in each half as the Lions banished memories of a poor opening match on their rugby union tour.

Warren Gatland, the Lions' assistant coach, hopes the scoreline earns his team a little more respect with the first of three Tests scheduled for Saturday June 20.

"I think it's a big step," Gatland told Sky Sports. "We were pretty disappointed with the opening game but we hadn't been together for a long time.

"We really fronted up today and we're pleased. It gets the tour on track and hopefully earns a bit of respect. That's what tonight's performance is all about."

The Lions looked tame in beating the Royal XV 37-25 on Saturday, and Gatland said there was a desire to set that performance right and prove they can be a test for the Springboks.

"We've not been given much of a chance coming here and the boys just wanted to show we're a good team," he said.

Stand-in captain Brian O'Driscoll echoed those thoughts. "It was a good victory and a good performance," he said. "This is where the Lions want to be at. We wanted to set out a marker and everyone who took to the pitch did that."

O'Driscoll came off after 60 minutes but insisted he could have played longer and that his injured shoulder is now fine.

"My shoulder felt good," he said. "I made a few tackles on that side and felt good."