(CNN) -- Roger Federer charged into his 20th straight Grand Slam semifinal with a straight-sets victory over France's Gael Monfils at the French Open on Wednesday. 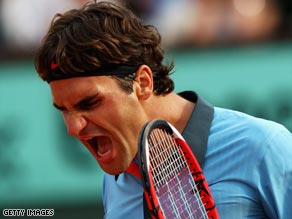 The Swiss former world No. 1, hoping to lift a first Roland Garros crown and complete his haul of all four Majors, was in solid form as he swept to a 7-6 (8/6) 6-2 6-4 win on Philippe Chatrier court.

Runner-up in Paris for the last three years, Federer will now face Juan Martin del Potro who reached his first career slam semifinal with a 6-3 6-4 6-2 win over Tommy Robredo.

"It was very important to win the first set. Gael felt it mentally and physically," said Federer. "I tried to play aggressively and because of that I made a lot of errors. Perhaps I took too many risks."

Even so, Federer was much more in control of his game compared to his last-eight clash when he had to recover from two sets and 4-3 down to defeat Germany's Tommy Haas.

His forehand was back working, his error count was lower and although 11th seed Monfils gave him a decent workout, the contest never lived up to the pre-match hype.

Federer, hoping to go on and equal Pete Sampras's record haul of 14 majors, was forced to save break points in the first and 11th games as an evenly-fought first set went to a tie-break.

After two mini-breaks each, Federer clinched it when he swatted home a forehand volley at the end of a riveting rally.

The second seed, a four-set winner over Monfils in the 2008 semifinals, was more consistent in the 28-minute second set leaving Monfils with a mountain to climb.

Home hope Monfils called for the doctor in the third set because of a stomach problem, but it was Federer who gradually applied the pressure.

In game nine, Monfils saved a first break point but on the second the remaining French hope in the men's singles slammed a forehand into the net.

That proved decisive and Federer held comfortably in the next to ease to only his second straight-sets victory this tournament and a date with del Potro.

The Latin American had beaten Robredo, who was playing in his fifth Roland Garros quarterfinal, on the only previous occasion the two had met in Madrid in 2007.

The 20-year-old fifth seed was quickly into his stride on Wednesday breaking the Spaniard in the seventh game on his way to claiming the first set after 34 minutes.

Del Potro eased through the rest of the match although he needed five match points to wrap up the tie.