(CNN) -- Former winner Serena Williams crashed out of the French Open on Wednesday leaving seventh-seeded Russian Svetlana Kuznetsova to face Australian Samantha Stosur for a place in the final at Roland Garros. 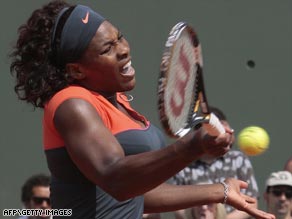 Serena shows the pain as she slumps to French Open quarterfinal defeat against her Russian rival.

Kuznetsova fended off a determined fightback by U.S. world number two Williams to reach the last four with a draining 7-6 5-7 7-5 triumph over the 10-time Grand Slam champion in two hours 46 minutes.

World number seven Kuznetsova broke twice to open up a 3-0 lead in the first set against Serena, but survived a set point at 5-6 on her own serve before turning up the heat to take the tie-break.

Winner in 2002, Williams looked to be on the way out when she trailed 4-1 in a second set that saw her rival serve for match at 5-3.The American responded with a double-break before levelling the encounter with an ace.

Williams saw off two match points at 4-5 down in a tense decider before finally capitulating with a tired backhand to hand Kuznetsova only her second victory over in seven meetings.

"I think I lost because of me and not because of anything she did," said a shattered Williams.

Doubles specialist Samantha Stosur clinched a place in the French Open semi-finals with a solid dismissal of teenager Sorana Cirstea.

Australian Stosur, 25, held her nerve best in a battle between two players making their debut in a Grand Slam quarterfinal to seal a comfortable 6-1 6-3 victory.

The 25-year-old Stosur, seeded 30, began with a double fault but then raced to a 3-0 lead over her nervous-looking opponent.

A wayward crosscourt forehand from the 19-year-old gifted Stosur another break and the Australian then wrapped up a quickfire first set at the first time of asking.

World number 41 Cirstea stunned fifth seed Jelena Jankovic last time out, having never previously made it past the second round of a major, but she was struggling in the blustery conditions.

The Romanian improved in the second, but it was Stosur who claimed the set's first break and the Gold Coast native went on to complete a comfortable win.