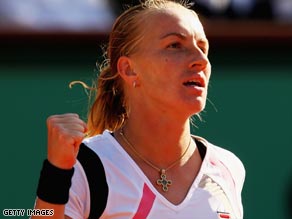 Kuznetsova was made to battle all the way by Sam Stosur before reaching the French Open final.

However, Kuznetsova will have to improve if she is to defeat the world number one, after blowing hot and cold for much of Thursday's match on Philippe Chatrier court.

The 23-year-old broke three times to take the first set and looked set for a comfortable victory when 4-2 up in the second.

Stosur, a winner of 22 doubles titles, was bidding to become the first Australian woman to reach the French Open singles final since Wendy Turnbull in 1979, but was making too many unforced errors.

However, she began a superb recovery -- breaking back in the eighth game and then recovering from 5-2 down in the tie-break to reel off five straight points, taking the match into a decider.

After an extended toilet break and a change of top, Kuznetsova came back fighting and needed just one break -- in the sixth game -- to seal the win.

"I'm a little tired because I've had two long matches in a row. But it's all nerves and emotions -- I'll be fine," Kuznetsova told reporters.

"She (Dinara) is going to be favorite. She's the number one. She's played an unbelievable season. I have nothing to lose out there."