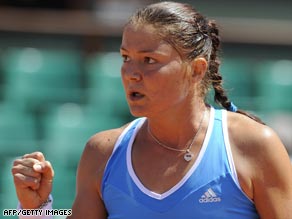 Safina is one win away from her first grand slam victory after defeating Dominika Cibulkova in straight sets.

The world number one posted a 6-3 6-3 success in an hour and 41 minutes and is now just one more victory away from a first-ever grand slam title.

Safina lost to Ana Ivanovic in last year's Roland Garros showpiece, and also to Serena Williams in the Australian Open final earlier this year, but she will now be favorite to end her wait for a major.

Cibulkova, the diminutive 20th seed who eliminated Maria Sharapova in the last eight, battled gamely in her first grand-slam semifinal appearance but did not have the power or variety in her game to seriously threaten the Russian.

However, 23-year-old Safina endured a nightmare start, losing her serve in the opening game and then slipping 2-0 behind on another beautiful Parisian afternoon.

But that was as good as it got for Cibulkova as Safina came back from 40-0 behind in game six to break the Slovakian for the second time and go 4-2 up.

Cibulkova saved three set points in the eighth game but Safina had two more on her own serve in the next, taking the set on the second of those thanks to an unreturnable cross-court forehand.

Cibulkova, who at 5ft 3in would have been the smallest grand-slam champion in the modern era, was broken again in the fifth game of the second set. Safina held serve twice and then broke again in game nine to seal victory.

"I don't think I am playing my best tennis at the moment but I am still proving to be not easy to beat," Safina told TV channel Eurosport. "It obviously gives you much more confidence when you know you can still do much better."

Safina will now play compatriot Svetlana Kuznetsova in this weekend's final after her fellow-Russian saw off battling Australian Samantha Stosur 6-4 6-7 6-3.

The only previous all-Russian final in the Open era at Roland Garros came in 2004 when Anastasia Myskina defeated Elena Dementieva in straight sets.