(CNN) -- Heikki Kovalainen finished quickest in practice for the first time this season to suggest McLaren might be contenders for Sunday's Turkish Grand Prix in Istanbul. 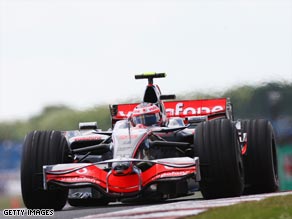 The team endured a miserable race in Monaco, with Kovalainen retiring after seven laps following an accident and world champion Lewis Hamilton finishing 12th and a lap down on race winner Jenson Button.

But Hamilton concluded the 90-minute morning session second quickest behind Williams' Nico Rosberg, before Kovalainen went one better in what proved to be a tricky afternoon session.

The Finn's time of one minute 28.841seconds was also the best of the day, bettering Rosberg's effort by just 0.111 seconds.

Fernando Alonso finished a mere six thousandths of a second behind Kovalainen in his Renault, followed by a return to form for Robert Kubica in his BMW Sauber -- who are also looking to make amends for a depressing day in Monte Carlo.

The other Williams of Kazuki Nakajima was fourth in the afternoon, with the Red Bull of Sebastian Vettel fifth, despite the fact he only managed four laps.

The 21-year-old German was forced to stop on track after feeling what he described as "a huge vibration" in his car, diagnosed as a driveshaft failure. It resulted in Vettel helping the marshals push his car backwards off the circuit to a safe area before it was returned to the garage.

Jarno Trulli was sixth in his Toyota, another team looking to up the ante after their miserable Monaco showing, with Rosberg seventh.

Brawn GP's Rubens Barrichello was eighth, with Mark Webber ninth in his Red Bull and Nelson Piquet 10th for Renault.

Felipe Massa, who has won this race for the last three years from pole, was down in 11th, followed by British pairing Button and Hamilton.

It proved to be Button's second worst practice session of the year, although explained by the fact Brawn ran more of a race set-up, rather than low-fuel qualifying runs.

As for Hamilton, he spun twice in the space of seven minutes, one of many to struggle on soft tires as there were a number of off-track moments throughout the afternoon.

Kimi Raikkonen finished 15th in his Ferrari, with the BMW Sauber of Nick Heidfeld 16th, while the Sebastiens of Bourdais and Buemi were again at the rear in their Toro Rossos.