(CNN) -- Sweden's Robin Soderling came from 4-1 behind in the final set to defeat 12th seed Fernando Gonzalez in a thrilling battle of the big hitters to reach the French Open final at Roland Garros on Friday. 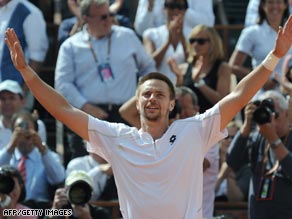 Robin Soderling salutes the crowd after his stunning five-set victory over Fernando Gonzalez.

Soderling, who shocked defending champion Rafael Nadal in the fourth round, continued his remarkable Parisian run by posting a 6-3 7-5 5-7 4-6 6-4 victory over Chilean Gonzalez in an epic match that lasted three hours and 28 minutes.

The 23rd seed is through to his first grand slam final, where he will now meet second seed Roger Federer, who beat fifth seed Juan Martin del Potro in five sets in the second semifinal.

Prior to Roland Garros, Soderling had not won more than two matches at any tournament since winning a title in Lyon in October last year.

He had never previously progressed past the third round at any grand slam event, but his form has been sensational these past two weeks.

The 24-year-old won four games on the spin to storm into a 5-2 lead and had hit 16 winners by the time he held serve to take the opening set.

After saving a set point in game 10 of the second set, Soderling then picked up four break points in the next game -- taking one to go 6-5 up when Gonzalez slammed a forehand wide. The Swede then recovered from 0-30 to serve out for the set.

However, 28-year-old Gonzalez, who had overpowered all his previous Roland Garros opponents including third seed Andy Murray, began to fight back.

He earned his first break points of both the third and fourth sets in what proved to be their final games, taking both at the first time of asking. And, in the fifth set, Gonzalez broke in game two to race into 3-0 and 4-1 leads.

Soderling looked down and out but he recovered, breaking back in the seventh game thanks to two marvellous winners from either wing on successive returns of serve, and another backhand winner on his third break point in game nine saw him go 5-4 ahead.

A superb forehand, his 74th winner of the match, sealed his win. "It's unbelievable. I played well in the first two sets. Then he started to play incredibly well," the Swede told reporters.

"I was down a break in the final set but I said to myself that I have nothing to lose. I started to return great and everything changed. I still have far to go with the most difficult match to come on Sunday."