(CNN) -- Defending champion Rafael Nadal has been forced to withdraw from the Queen's Championships, a key warm-up event for Wimbledon, which begins on Monday. 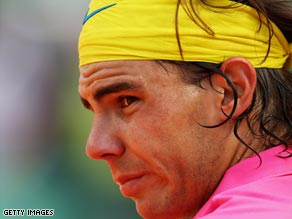 World number one Nadal has been told by doctors to rest his injured knee.

The world number one and reigning Wimbledon champion, has a knee injury and has been advised to rest by doctors.

"I am very disappointed to not be able to come this year to Queen's, defend the title I won last year and enjoy playing there in front of the very knowledgeable British crowds," said Nadal.

"To play in London has always been special for me, to play at The Queen's Club is an honor and the fans in the UK are among the best I have ever seen, always supporting me since the first time I played there.

"I have been having some problems in the past months with my knees, that's no secret, and it's stopped me competing always at 100 per cent.

"I need to work with my team to recover well, work on my physical condition to be at my top form and get ready for the grass to play at Wimbledon.

"I hope I can be ready to compete by then. I am really sorry and I hope that the people at the tournament will still want me to come next year."

The news is a another blow for the Spaniard who, despite being used to arriving at The Queen's Club as the newly crowned French Open champion, suffered his first-ever defeat at Roland Garros losing to Sweden's Robin Soderling in a last 16 tie.

Queen's tournament director Chris Kermode said: "It is obviously disappointing for everyone that Rafa has had to withdraw from the AEGON Championships as he has been a huge favorite with the crowds here at The Queen's Club over the past three years."

"No-one is more disappointed than Rafa himself. He called me personally to tell me the news and how sorry he was, particularly as he loves playing in front of British tennis fans, but his health must come first," he added.