(CNN) -- Sebastian Vettel grabbed pole for Sunday's Turkish Grand Prix in Istanbul to deny Jenson Button a hat-trick of starts from top spot on the grid. 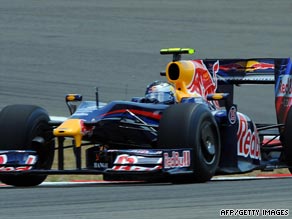 Vettel claimed the third pole position of his career after finishing fastest in Turkish GP qualifying.

The German Red Bull driver left it until the final hot lap of the closing 10-minute qualifying session to demote championship leader Button down to second, with Brawn GP team-mate Rubens Barrichello back in third position.

It is the third pole of the 21-year-old's career, with both his victories to date coming from the front of the grid, in Italy last year and China this season.

Vettel, the first driver this season to be quickest in all three qualifying sessions, told reporters: "We had an engine failure in second practice and I didn't get many laps in, but I still had a good feeling for the car.

"It's quite a surprise to be quickest in all three sessions, but finally we have made it and we are ahead of the Brawns.

"It's been quite an effort by the team because we had some parts arrive late, but they've fixed them on and we've made it."

Button, who had previously been on pole four times this year, was happy enough with his qualifying session following "a tough day" yesterday, mainly caused by the windy conditions.

Reflecting on a significantly improved performance, Button, who has a 16-point championship lead over Barrichello and 28 to Vettel, said: "With changes to the set-up and a calmer wind, it was so much better. We're on the front row, which is a great place to be, but well done to Sebastian for beating us."

Behind the top three in the hunt for the points come Mark Webber in his Red Bull, followed by Toyota's Jarno Trulli and Kimi Raikkonen for Ferrari.

Felipe Massa, who has won this race for the last three years from pole, will have to go some to make it four in a row from seventh on the grid. The top 10 is rounded out by Fernando Alonso for Renault, Williams' Nico Rosberg and BMW Sauber's Robert Kubica, aiming to break his points duck for the year.

It proved a dismal day for the McLaren team, despite some much-improved performances in Friday's second practice session.

Heikki Kovalainen could only qualify in 13th place, while world champions Lewis Hamilton's nightmare season continues as he slumped to 15th position, behind even the Force India of Adrian Sutil.