(CNN) -- Roger Federer has finally won the only grand slam tournament to elude him after beating Sweden's Robin Soderling in straight sets to claim the French Open title at Roland Garros. 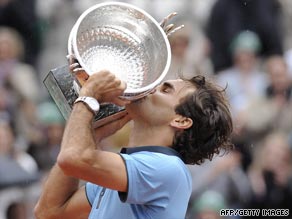 Federer is the French Open champion at last after beating Robin Soderling in straight sets at Roland Garros.

The Swiss world number two had 13 grand slam successes to his name prior to the event, but none of them had been on the Parisian red clay.

However, that changed on Sunday as the 27-year-old cruised to a 6-1 7-6 6-4 victory over 23rd seed Soderling, the man who had caused a sensation by dumping four-time winner Rafael Nadal out of the tournament earlier in the week.

He also moved into a select group made up only of Fred Perry, Don Budge, Rod Laver, Roy Emerson and Andre Agassi as men who have won all four of the grand slam events.

"It was probably my greatest ever victory, I was under big pressure. But I did it and it's phenomenal," an emotional Federer told a packed crowd on Court Philippe Chatrier -- before breaking down in tears after being presented with the trophy by American Agassi, the 1999 French Open champion and last player to win all four slams.

"I think that now and until the end of my career, I can really play with my mind at peace and no longer hear that I've never won Roland Garros," he added.

You say: Is Roger Federer the greatest tennis player in history?

Soderling, who beat Nadal and Nikolay Davydenko en route to the final, told the crowd: "I had the two best weeks of my career. Roger is a really worthy winner. To me he is the best player in history so he really deserves to win here at the French as well."

The 27-year-old Federer, playing in his 19th grand slam final, could not have wished for a better start under threatening skies, which produced drizzling rain for the majority of the match.

The Swiss dropped just one point on his serve in three games, but, in contrast, Soderling's serve was far from convincing and he soon trailed 4-0.

Soderling got on the scoreboard in the fifth game but he had already been broken twice by then. In the seventh game, the Swede was facing two set points when a rasping Federer forehand flew past him.

Soderling saved the first with an unreturnable serve but on the second, Federer unleashed a whipped backhand for the set.

The second set, which did not have a single break of serve, was overshadowed by an incident which saw Federer come face to face with a court invader at the start of the fourth game.

How it happened: See the French Open final in photos »

The man, wearing a top bearing the word 'Switzerland' on its chest, came down from high up in the stands and vaulted the barriers to enter the court.

He ran up to Federer and brandished in front of the player's face what appeared to be a flag of Spanish team Barcelona. He then attempted to put a cap on the head of Federer, who retreated way behind the service line. Security took their time coming onto the court to aid Federer but when they did, they managed to accost the invader, who by that time had frantically run across the court and leapt the net.

Federer at first appeared shaken -- he lost the next game to love -- admittedly on Soderling's serve, but calm was soon restored as the rain started to come down and the set went to a tie-break.

Federer played it flawlessly, smashing down four aces from four serves to clinch it in style. He then grabbed the key break in the third set in the very first game.

Soderling by that time had got over his early-match jitters but he could not halt Federer's juggernaut of a serve. He only earned his first break point of the match in the fourth game of that set, but the Swiss came up with a fine forehand passing shot to save.

Serving for the match, Federer went break point down again to add to the drama. Soderling wasted that with a mis-hit and then netted a return into the net two points later to hand Federer the title.