Sampras: Federer is the 'best ever' 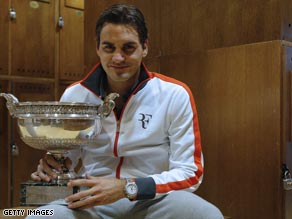 The 37-year-old American, nicknamed 'Pistol Pete' for his bullet-like serves, won a record 14 grand slam men's singles titles over a 15-year career, though never captured the trophy at Roland Garros.

In beating Sweden's Robin Soderling 6-1, 7-6, 6-4 to take the French title on Sunday, Federer equaled Sampras's record and became only the sixth man in history to win each of the four majors. Debate: Is Federer the greatest player ever?

The feat marks the 27-year-old Swiss out as the finest player to ever grace the game according to Sampras: "What he's done over the past five years has never, ever been done -- and probably will never, ever happen again.

"Regardless if he won there or not, he goes down as the greatest ever. This just confirms it," Sampras told the Guardian newspaper.

"I'm obviously happy for Roger. If there's anyone that deserves it, it's Roger. He's come so close (previously)," Sampras said of the new champion and world number two, who lost the last three consecutive French Open finals to Spain's Rafael Nadal.

spoke exclusively to CNN after his win and said he was relieved to have bounced back after relinquishing the world number one slot and the Australian and Wimbledon titles to Nadal in 2008.

"It's been a fantastic day - to get the elusive French title in the end was unbelievable. I always believed I was good enough to get it - but holding the trophy, after all I've been through was just unbelievable. I'm so proud right now you can't believe it.

"For me there was never a question whether I was going to retire. I worked extremely hard in the off season. Losing semifinals and finals all of a sudden wasn't good enough for people anymore. But this victory is timely because I've proved many people wrong."

The historic nature of the victory was also not lost on Federer: "The records mean a lot to me especially after the last few years when I realized that I was (up there) with the greatest players of all time. Of course I like to break records - because I look up to people like Sampras, Agassi, Connors and McEnrore, it's so great to be up there with those players."

However, in an ominous warning to his rivals, the champion already said he had eyes on his next conquest: "I still feel like I have much more left in me - I'm only 27 years-old and I'd like to play for many more years to come and I hope I reach many more titles."

Federer's vanquished opponent in the final, Soderling also praised his conquerer: "For me he is the best ever and I should know as I've player him many times," the world-ranked number 12 told CNN.

Next up for Federer is the third grand slam of 2009, Wimbledon, where he will aim to go one better than Bjorn Borg by winning the tournament six times when the event starts on June 22.

"Today I wrote to Roger Federer to congratulate him on this unique success because I consider him to be the best player of all time," Rogge told a media briefing in Brussels on Monday.

The IOC supremo revealed that in the letter he had expressed the hope that Federer would take part in the 2012 Olympic Games in London.

Federer added an Olympic gold to his collection of tennis accolades by winning the men's doubles with compatriot Stanislas Wawrinka in Beijing last year.