Who are the British Lions?

(CNN) -- Forget World Cups. For many rugby union players the ultimate accomplishment is being selected to appear for the famed British Lions on their overseas tours. 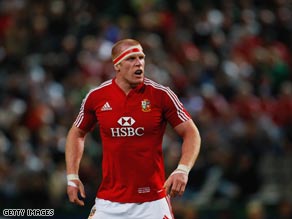 The Lions are comprised of the best players from the four home unions of England, Scotland, Wales and Ireland and competition for places in the squad is fierce as club and country loyalties are put aside.

A typical tour will see a series of matches against provincial or regional sides, interspersed with international or Test matches.

Midweek fixtures are normally against weaker teams, with the Lions giving all their squad members a chance to play, with stronger opposition for the weekend matches which would include the Tests.

The 2009 Lions are touring world champions South Africa, looking to improve on the dismal performance of the 2005 side, which visited New Zealand.

Under England's 2003 World Cup winning coach Clive Woodward, the 2005 squad were expected to prosper, but slipped to defeat in all three Test matches against the All Blacks.

The team was captained by Brian O'Driscoll, but his tour ended after just two minutes of the first Test when he was controversially 'spear' tackled by Tana Umaga and Keven Mealamu and dislocated his shoulder.

O'Driscoll, who led Ireland to the Six Nations Grand Slam this year, was expected to captain the Lions to South Africa, but coach Ian McGeechan gave the job to Munster lock Paul O'Connell.

McGeechan has already gone into Lions history, playing on the 1974 and 1977 tours, and coaching winning teams to Australia and South Africa in 1989 and 1997.

The Lions enjoyed their most successful period in the early 1970s with the 1971 team -- inspired by the Welsh half-back pairing of Gareth Edwards and Barry John -- triumphing against the All Blacks in New Zealand.

The 1974 Lions were arguably the best-known and most successful of all time, winning three Tests and drawing one in South Africa and going through the tour unbeaten.

Under Irish captain Willie John McBride, their uncompromising forward play set up the victories, with their now infamous catch phrase "get your retaliation in first" leading to brutal early exchanges in most games.

The modern era is a far cry from the first Lions tour back in 1888 which visited Australia and New Zealand with just 21 players from England, Scotland and Wales.

They played provincial and local sides without formal Test matches.

But it had established a precedent, and the 1891 side was sanctioned by the sport's ruling body the Rugby Football Union (RFU) and played three Tests against South Africa.

The 1924 tour to South Africa was the first trip when the term "the Lions" became common currency and it has grown from strength to strength since, despite the growing influence of international rugby competitions such as the Tri and Six Nations and the World Cup.