Substitute James Hook scored a late long-range penalty to preserve the British and Irish Lions' winning run in South Africa with a 26-23 victory over Western Province in Cape Town. 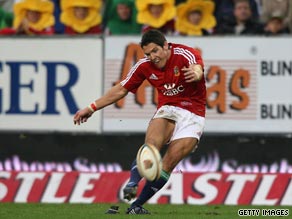 Hook fires home the late penalty that made it five wins from five for the Lions in South Africa.

Wales back Hook struck from 50 meters with four minutes left to halt the home side's fightback.

The Lions looked in control at 18-9 ahead after tries from man-of-the-match Tommy Bowe and his fellow-wing Ugo Monye.

But Western Province kept plugging away as full-back Joe Pietersen's try set up a tense finish.

Pietersen had earlier dropped a goal, as did fly-half Willem de Waal, who also kicked four penalties, yet the Lions did just enough to make it five wins from five a week before the first Test against world champions South Africa.

Flanker Martyn Williams also added a try, while two Stephen Jones penalties and a conversion contributed towards the victory.

Meanwhile, France ended 15 years of heartache on New Zealand soil with a surprise 27-22 victory against the All Blacks in the first Test in Dunedin.

It was just their fourth win since their first visit in 1961 and comes 20 months after France bundled the same opponents out of the World Cup in Cardiff.

The French showed no mercy against an inexperienced New Zealand side shorn of many of their leading stars and will now be confident of securing a series win in the second Test in Wellington next weekend.

Elsewhere, a James O'Connor hat-trick inspired Australia to a comfortable 31-8 victory over Italy in freezing conditions in Canberra.

Teenage winger O'Connor crossed twice in the opening half-hour as the hosts built up a commanding 17-3 advantage before the break.

The Wallabies suffered an early setback when Kaine Robertson scored the visitors' only try in the 43rd minute, but they reasserted their dominance when Stirling Mortlock barged over with half an hour to play.

And when their 18-year-old prodigy crossed for his third 10 minutes later, victory was assured for the hosts to the delight of the 22,468 supporters who braved the icy temperatures.