(CNN) -- Former champion Maria Sharapova has been seeded for next week's Wimbledon championships. 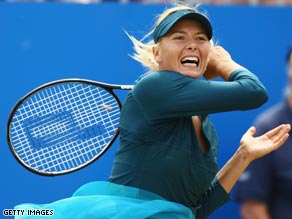 Sharapova powers a forehand during the WTA tournament in Birmingham last week.

The Russian has only recently returned to action after a serious shoulder injury, but despite performing solidly in the French Open and reaching the semifinals of the WTA grasscourt event in Birmingham last week, she remained 59th in the rankings.

But Wimbledon, who are alone among the grand slams in not sticking entirely with the official rankings of the ATP and WTA in deciding the seedings, have given Sharapova the 24th berth.

World number one Dinara Safina of Russia is top seed, followed by Serena Williams and defending champion Venus Williams, who is elevated to third because of her prowess on grass.

Rafael Nadal, who remains a slight injury doubt to take his place in the draw, is the top seed in the men's tournament, with the top six spots in the list following the ATP rankings list.

The defending champion will test his injured knees by playing in two exhibition matches on grass at the Hurlingham Club in London later this week, organizers announced Wednesday.

The Spaniard will play Lleyton Hewitt of Australia on Thursday and Stanislas Wawrinka of Switzerland on Friday.

Five-time champion and pre-tournament favorite Roger Federer is second seed at Wimbledon as he bids to set a record of 15 grand slam wins after his French Open triumph.

Home hope Andy Murray, who won the Queen's Club tournament on Sunday, is seeded third with Novak Djokovic of Serbia in fourth.

Eighth-ranked Fernando Verdasco of Spain gets the seventh seed spot ahead of Frenchman Gilles Simon.

Outside of the top seeds, Marat Safin of Russia has been elevated to 15th from his world ranking of 23.

Former world number one Safin reached the semifinals at the All England Club last year.

Big-serving Croatian Ivo Karlovic is lifted to 23rd from 31st.

The third grand slam of the year starts next Monday with the all-important draw being made on Friday.

In the pre-Wimbledon warmup action on Wednesday, top seed Dinara Safina of Russia beat Yaroslava Shvedova of Kazakhstan 6-3 6-3 in the Ordina Open in the Netherlands.

But Amelie Mauresmo of France was beaten 7-6 7-6 by Russian Ekaterna Makarova at the WTA tournament in Eastbourne.