Formula One chief 'unconcerned' by rift 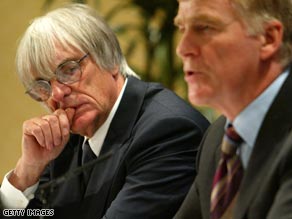 F1 supremo Bernie Ecclestone and FIA chief Max Msley with much to ponder.

Ecclestone told the BBC: "I don't think it will happen. I'm not concerned - Formula One has been going for 60 years and that won't change anytime soon."

Ecclestone's comments come after eight Formula One teams announced their intentions to create a breakaway championship following a financial dispute with the world governing body over a proposed budget cap for next season.

All eight teams - Ferrari, BMW-Sauber, Brawn GP, McLaren-Mercedes, Red Bull, Renault, Toro Rosso and Toyota - are members of the Formula One Teams' Association (FOTA), who announced their plans in a press release after a meeting on Thursday.

The first day of practice for the British Grand Prix, round 8 of the Championship, takes place at Silverstone today where all the main figures involved in the dispute are in attendance at the race track.

A press conference by the FIA and team representatives from McLaren, Brawn GP, Red Bull and Williams will be held in line with normal procedure ahead of a grand prix at 1600 GMT.

The current crisis stems from controversial plans by the Max Mosley-led Federation Internationale de l'Automobile (FIA) to impose a budget cap of $60M for competing teams in 2010.

Though the FIA hope such plans will make the grid more balanced and easier for the smaller teams to compete successfully, FOTA complain the wishes of the majority of teams have been "ignored."

"Furthermore, tens of millions of dollars have been withheld from many teams by the commercial rights holder, going back as far as 2006," FOTA added in a statement.

"These teams therefore have no alternative other than to commence the preparation for a new championship which reflects the values of its participants and partners," the statement continued.

The association said its series will "have transparent governance, one set of regulations, encourage more entrants and listen to the wishes of the fans, including offering lower prices for spectators worldwide, partners and other important stakeholders."

Brawn GP's Nick Fry, the chief executive of the team leading both the constructors' and drivers' championship, told the BBC: "We mean it - it was a difficult decision but we've negotiated with Bernie and the FIA in good faith and now it looks like we'll do something different.

"Some of the decision-making [regarding the governance of the sport] have been done without the consensus of those taking part, we're not against the reduced costs but the cap is too low, " Fry added.

But Fry, whose Brawn team told CNN they had warmed to the FIA's plans initially, was still convinced there would be F1 next season but was unsure of the "format."

The FIA responded by issuing a statement on its Web site stating: "We are disappointed but not surprised by FOTA's inability to reach a compromise in the best interests of the sport.

"It is clear that elements within FOTA have sought this outcome throughout the negotiation and have not engaged in the discussions in good faith.

"The FIA cannot permit a financial arms race in the Championship nor can the FIA allow FOTA to dictate the rules of Formula One.

Currently only five teams have committed to racing in next season's championship: Williams and Force India, who were expelled from FOTA for agreeing to participate, and new teams Campos GP, Manor F1 and Team US F1.

Jackie Stewart, a former Formula One triple world champion, told the Guardian newspaper that Mosley may have to "leave his post."

"I think they [the teams] do want Max to go because frankly some of the decisions made over the years have been very questionable.

"I think a lot of people are kind of fed up with the dictatorial attitude. He has a great position of power but big trees do blow over," Stewart added.