(CNN) -- The New Zealand All Blacks secured a narrow 14-10 victory over France in Wellington on Saturday to square their rugby Test series at 1-1, but France still secured the Dave Gallaher Cup for the first time since it was introduced in 2000 by virtue of their five-point victory in Dunedin last week. 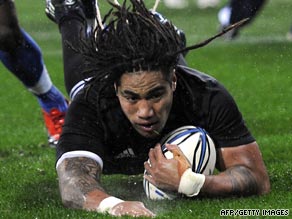 Ma'a Nonu goes over for New Zealand's only try in their narrow victory over France in Wellington.

Having been out-muscled and out-played 27-22 in the opening Test, the New Zealanders played with far greater intensity, physicality and urgency at a cold, wet and windy Westpac Stadium.

A Ma'a Nonu try midway through the first half opened the scoring for the host nation before Stephen Donald slotted home a penalty for an 8-0 advantage at the break.

The French reply was swift after the restart, with wing Cedric Heymans crossing the line with a superb solo effort and then Julien Dupuy's conversion getting them back into the game.

But another Donald penalty and one from substitute Luke McAlister edged the All Blacks further ahead before a late three-pointer from Dimitri Yachvili kept things interesting.

Meanwhile, a much-changed Australia side comfortably accounted for Italy 34-12 in Melbourne on Saturday.

Man-of-the-match Adam Ashley-Cooper, who started on the bench, finished with two tries, one in each half, after coming on initially when Peter Hynes was blood-binned, then as a replacement for James O'Connor at full-back.

Three first-half tries gave the Wallabies a 20-6 lead at the break and that was a fair reflection of the difference between the teams, but the hosts were held at bay for much of the second half before late tries by Lachie Turner and Ashley-Cooper.

Australian-born full-back Luke McLean landed four penalties for Italy for whom fellow-Aussie Craig Gower was effective and creative in his second start at fly-half.