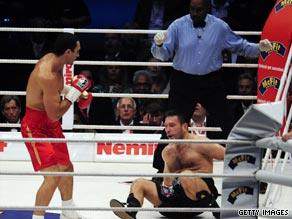 World heavywright champion Klitschko leaves Chagaev on the canvas on his way to retains his titles.

The Ukrainian controlled the fight with effortless ease before Chagaev's corner, with their fighter already well beaten, opted to call a halt to the contest at the end of the ninth round.

Chagaev had been drafted in for the fight after Briton David Haye withdrew from his scheduled meeting with Klitschko after sustaining a back injury earlier this month.

And the Uzbek, who had his bout with Nikolay Valuev called off last month due to health worries, put in a determined display -- despite the evident gulf in class -- in front of a 66,000 crowd at the Valtins Stadium.

Klitschko landed his first telling blow with a minute to go in the second round when he caught Chagaev flush in the face with a straight right, prompting an eight count.

The reigning world champion was a composed presence throughout as he took control of the fight behind his pawing left jab.

Chagaev was unable to find a way to get close enough to test the Ukrainian, who further ensured his superiority with some heavy blows in the fourth round.

That was the story of the fight as Klitschko opted for a safety-first approach while picking his moments to attack.

Chagaev to his credit battled on despite being outclassed and despite a cut opening up over his left eye in the sixth round.

Klitschko found the wound with another straight right just after the bell to end the seventh round, which drew an immediate apology from the Ukrainian.

Klitschko then looked to end the fight at the end of the ninth when he peppered his rival with a series of blows, which immediately proceeded Chagaev's retirement.