Shock win for USA over Spain in Confed Cup

(CNN) -- In one of the biggest upsets in international football in recent times the USA beat European champions Spain 2-0 in the first semifinal of the 2009 Confederations Cup in Bloemfontein, South Africa. 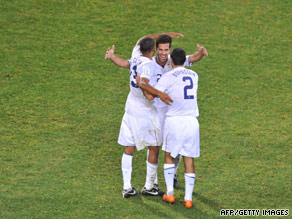 USA's Jozy Altidore, who has struggled to break into Spanish club side Villareal, opened the scoring at the Free State Stadium on 27 minutes when he used his strength to shrug off Spain's defender Joan Capdevilla before lashing home off Iker Casillas from the edge of the area.

A superb performance from USA and Everton goalkeeper Tim Howard and stubborn defense kept out Spain's potent attacking duo of Fernando Torres and David Villa for much of the game, as the American's dream of a win looked increasingly likely.

Hopes were realized when Clint Dempsey then extended the improbable lead with 15 minutes left of the game when the Fulham midfielder capitalized on a defensive mishap from Sergio Ramos.

USA now progress to Sunday's final where they will meet either Brazil or hosts South Africa, while Spain will play for third place on the same day.

Watch South Africa's team get a boost from Nelson Mandela »

In truth Altidore's goal rewarded a dominant opening by the underdogs who started much the brighter, keen to show they would not be overawed by their much-feted opponents.

Spain, who were on course to surpass Brazil's record of 35 international games without defeat, have widely been tipped as one of the favorites to win the World Cup in 2010; such is the array of talent their squad boasts.

But in the USA the Spaniards came up against a hard-working side that were no respecters of status.

Charlie Davies epitomized the fighting spirit of his side with an overhead kick that just bounced wide after seven minutes.

Spain started the second half with attacking intent with Villa testing Howard soon after play had got underway, before the keeper made crucial saves against Cesc Fabregas from long range.

Ramos then rattled the upright on 64 minutes, as Spain's aggressive forward play looked to put their opponents under further pressure. However, the robust and evidently supremely fit North Americans maintained their energy and defensive nous to snuff out attacking supply lines.

Despite the his side looking increasingly vulnerable, USA coach Bob Bradley maintained two strikers high up the pitch and the gamble paid off when, against the run of play Dempsey pounced on the Spanish rearguard's failure to clear a rare attack from the men in white.

As the end of the game neared, nerves became even more frayed when Michael Bradley, the son of USA coach Bradley, was sent off with four minutes to go after a studs-high challenge.

But the margin was too great to overcome, even for a team of Spain's stature. The sad news for midfielder Bradley is he will now miss his country's first appearance in a major final through suspension.