(CNN) -- Second seed Roger Federer is through to the last 16 of the men's singles at Wimbledon, despite dropping a set on his way to a Centre Court victory over Germany's Philipp Kohlschreiber. 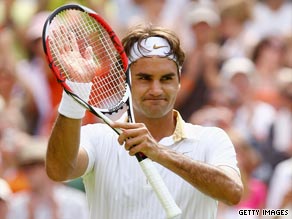 Federer impressed for the majority of his third round Wimbledon win over Germany's Philipp Kohlschreiber.

The Swiss, bidding for his sixth success at the grass-court grand slam, set-up a fourth round clash with Sweden's Robin Soderling -- his victim in last month's French Open final -- with a 6-3 6-2 6-7 6-1 win over the 27th seed.

Federer, who now has the whole weekend to rest before taking on Soderling, told Press Association Sport: "It has been a good first week. I thought this was my best match of the tournament even though I lost a set.

"It's fine as long as you come through without losing too much energy. It will be nice to have Saturday and Sunday off and get rid of the pressure for a day or so.

"I felt a lot of pressure two years ago but I feel relaxed now. It's going to be an exciting second week," added Federer.

Elsewhere, seventh seed Fernando Verdasco of Spain has also reached the last 16 of the tournament despite dropping the first set in a 4-6 6-1 6-4 7-6 win over 32nd-seeded compatriot Albert Montanes.

Verdasco will now face big-serving Croat Ivo Karlovic, who caused a minor shock in dumping out ninth-seeded Frenchman Jo-Wilfried Tsonga in a tight match -- going through 7-6 6-7 7-5 7-6.

There was another surprise when Israeli Dudi Sela, who dumped former U.S.Open champion Marat Safin out of the competition, continued his giant-killing ways with 7-6 7-5 2-6 7-5 success over 15th seed Tommy Rodrebo of Spain.