(CNN) -- Former rugby superstar Jonah Lomu has revealed that he is poised to make a shock playing comeback at the age of 34 with French third-division club Marseille Vitrolles. 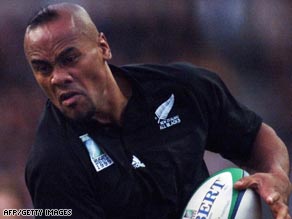 Jonah Lomu pictured in action for New Zealand's All Blacks during the 1999 World Cup in France.

The giant New Zealander, who became a global name after an electrifying series of performances on the wing for the All Blacks at the 1995 World Cup, retired in 2007 after a succession of injuries hampered his attempt to return following a kidney transplant.

He played 63 internationals, the last of them in 2002, but was never able to regain his previous dominance even after regaining full health.

"Marseille Vitrolles is on the point of finalizing the transfer of the greatest legend in world rugby," said statement on the club's Web site.

Lomu, who is featuring in a new worldwide advertising campaign for sportswear manufacturer adidas called "Nothing Is Impossible", was also quoted as confirming his desire to return to the playing field.

"I took a sabbatical year to be at my pregnant partner's side and to fully enjoy this important moment in any man's life," he said on the Web site.

"Everyone thought I had ended my playing career, but that was wrong. I still feel the desire to play and it will be me alone who decides when to call it a day.

"My ambition is to help a club like Marseille join the group of top clubs in France."

Lomu was first diagnosed with nephrotic syndrome, a rare and serious kidney disorder, at the end of 1996.

He successfully returned to the game after treatment, but in May 2003 he was put on dialysis three times a week due to deterioration in his kidney function, with the treatment's side effects leaving him with severe nerve damage in his feet and legs.

Lomu faced life in a wheelchair if a kidney transplant was not performed, so underwent the operation.

He signed a two-year contract with New Zealand province North Harbour in 2005, and also played for Welsh club Cardiff Blues during the southern hemisphere's off-season.

However, he was unable to achieve his goal of being selected in the All Blacks squad for the 2007 World Cup in France, having suffered a shoulder injury.

Lomu agreed to play in a charity match in England last year, but withdrew after injuring his ankle in training.