(CNN) -- Andy Murray survived a five-set thriller on Monday to defeat Stanislas Wawrinka and advance to the Wimbledon quarterfinals. 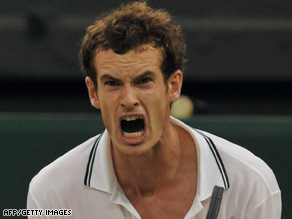 In the first match to be played entirely under a closed roof, the top-ranked British player and crowd favorite took just under four hours to beat Wawrinka, 2-6, 6-3, 6-3, 5-7, 6-3.

Following his final forehand winner, Murray dropped to his knees from exhaustion and apparent relief.

The late-night match by Murray capped an exciting day that kicked off the final week of Wimbledon.

Earlier, Roger Federer served notice of his determination to claim a record 15th Grand Slam crown by firing 23 aces as he shot down Robin Soderling to reach the Wimbledon quarterfinals.

Federer triumphed 6-4 7-6 7-6 in a repeat of the recent French Open final win that saw him defeat Swede Soderling and equal Pete Sampras's haul of major titles.

"Today was pretty much a serving contest," admitted Federer of a match which featured just one break of serve. "It was just hard to get through, a dangerous match.

"I thought Robin served great and thank God he served a double fault in the tie-break otherwise it could have gone to four sets.

"I'm happy to be through four matches already, I gave myself a chance back in the quarters and I'm looking forward to my next match."

Officials ordered the new retractable roof closed for the rest of the match -- the first time it has been used during play in the tournament -- and Safina responded by battling back to reach her first Wimbledon quarterfinal 4-6 6-3 6-4.

Asked afterwards about the roof, she told the BBC: "It was great, very nice. I can't compare (it) with anything. It's a really nice atmosphere, especially with the crowd because it's getting louder."

Germany Tommy Haas, the oldest man left in the draw at 31, reached his first Wimbledon quarterfinal with a 7-6 6-4 6-4 win over Russian 29th seed Igor Andreev.

"I served extremely well. I didn't give him many opportunities or the confidence for him to break me," said Haas who won the Halle grasscourt tournament in the run-up to Wimbledon.

"I'm having a fantastic run and I'm really pleased to be in the quarterfinals."

Lleyton Hewitt showed all his fighting spirit as he battled back from two sets down to defeat Radek Stepanek 4-6 2-6 6-1 6-2 6-2 in their fourth-round match on Court Two.

Hewitt had not dropped a set in his first three matches but, apparently struggling with a thigh problem, he was decidedly second best in the opening two sets.

Stepanek, who had been a doubt to start because of a knee problem, looked in control but he faded badly, winning only five games in the final three sets as his Australian rival prevailed.

Roddick served 24 aces during his match, and did not offer a single break point. Roddick is the only U.S. men's player to reach the fourth round at Wimbledon during the past four years.

In sweltering conditions at the All England Club, Federer seemed content to take a cautious approach, allowing his opponent to dictate the rallies from the baseline with his powerful groundstrokes.

But the world number two finally stepped up a gear when required to break Soderling's previously dominant serve in the ninth game, taking advantage of a double fault and forehand error for a 5-4 lead before serving out for the set.

Soderling, who had lost all 10 of his previous matches against the Swiss, was unable to exert any pressure on Federer's serve in the second which was decided on a tie-break.

But he had a chance in the third set tie-break when he led 5-4 with two serves to come, only for Federer to produce a brilliant forehand winner.

Soderling then served a double fault to gift Federer his first match point and he gratefully accepted to seal a hard-fought victory.

Djokovic continued to progress almost unnoticed as he claimed his place in the last eight with a 6-2 6-4 6-1 victory in just 89 minutes.

With all of the attention on Federer and British hopeful Andy Murray, the Serbian fourth seed and 2008 Australian Open winner has managed to keep a low profile so far in the tournament.