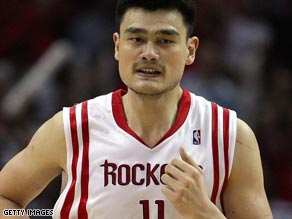 Yao Ming's entire basketball future could be in danger due to his persistent foot injury.

"At this point, the injury has the potential for him missing this next season and could be career-threatening," Clanton told the Houston Chronicle regional newspaper.

"One of the things we are trying to get is a consensus opinion on that, to make certain there is no option we are overlooking that would provide an earlier return or would be an option for treatment that he would prefer rather than doing additional surgery," he added.

Yao fractured his left foot last month during a semifinal match against the Los Angeles Lakers in the NBA Western Conference semifinals and has been visiting specialists ahead of treatment since then.

Clanton continued: "At this stage, he is having no symptoms or physical signs, he has no tenderness, no swelling, no redness. When he came back in, he was feeling like everything was perfect, and he would start rehabilitation and get ready to play.

"The findings on the CT were shocking for him and for us. You don't treat a CT scan; you treat a patient. We are looking for every reason to treat this on clinical findings but don't want to put him at risk for a greater fracture," he added.

The diagnosis raises doubt over the playing future of one of the biggest stars in the National Basketball Association (NBA) and one of the most famous celebrities to hail from China.

Yao is a national hero in his homeland, and the news has prompted a frenzy of postings on the internet, arguing about the why's and wherefore's of his injury.

"He is really tired," says one Netizen posting on Sina.com. "He needs to rest, we cannot let the giant fall!"

"I wish everything will work out well for Yao Ming," says another teenage basketball fan. "There is always a way to deal with injuries. We should not give up."

Some Yao supporters think he should take a long break -- even for the whole season -- and make a comeback later. "I think his injury is very bad," opines Ma Jian, a TV commentator who played for the Chinese national team.

"With all the weight training the team have put him through in the past seven years, Yao has gained about 20 kilos in his upper body. But his lower body, especially his feet, did not gain much strength to hold his large frame."

The 28-year-old Yao has been a perennial pick for the NBA All-Star teams since moving from the Shanghai Sharks to the Rockets in 2002.

Yao also captained the Chinese team as hosts at the 2008 Beijing Games, as well as taking the role of flag-bearer in the opening ceremony.

Yao was awarded the honor of "model worker" in 2005 by China's ruling Communist Party.

However, despite his popularity, Yao still has his share of detractors. Known as "Yao hei" -- they are people who are out to smear the player.

"He is a man made of glass," says one posting on Sina.com. "Should we call him Yao the glass or Yao the porcelain?" asks one rhetorically.

Yao is now a multi-millionaire, earning millions of dollars yearly, not just from his NBA team but from lucrative commercial endorsements.

Admirers say Yao has done more for improving China's image overseas than any modern-day politician or diplomat. Next to the giant panda, Yao is perhaps China's best known and much loved, icon, in part because exudes a wholesome, feel-good image.

"He is such an affable, likeable guy," recalls Colin Pine, who used to serve as his personal translator during his years as an NBA rookie in Houston.

His demeanor on and off the court has endeared him to the media and multitude of basketball fans overseas, who admire his modesty and maturity. His loyal fans hope Yao will get an extension of his already long and successful career.