Federer powers on as Djokovic crashes out

(CNN) -- Five-time Wimbledon champion Roger Federer is through to his 21st grand slam semifinal in a row after crushing big-serving Croat Ivo Karlovic in straight sets on another scorching afternoon on Centre Court on Wednesday. 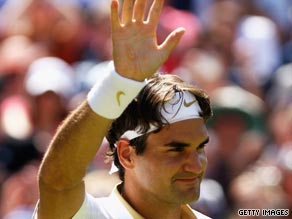 Federer continued his march towards a sixth Wimbledon title with a crushing victory over Ivo Karlovic.

The second-seeded Swiss, who is attempting to win a record 15th major title, will now face unseeded Tommy Haas for a place in Sunday's final, after the German repeated his Halle final victory over Novak Djokovic by ousting the fourth-seeded Serb in four sets.

"It's difficult against Karlovic because there aren't many baseline rallies on his serve or mine," Federer told the BBC after going through 6-3 7-5 7-6 in just one hour and 42 minutes.

"It's tough mentally because it's hard to break him. So I was happy to break him and win the match. To be in my 21st consecutive major semifinal shows how consistent I have been and injury free.

"I'm playing well at the moment but there are some big matches still to come."

Going into the match, 6ft 10in (2.08 meters) Karlovic had not dropped serve in the tournament and had won 79 service games in four rounds, facing just four break points and firing a massive 137 aces in the process.

But second seed Federer ended that streak in the fourth game with a superb backhand return -- and was never in danger from then on as he continued his march towards a sixth All England Club title.

Federer must now overcome Haas -- the oldest man left in the draw at 31 -- who pushed the Swiss maestro to the brink of defeat at the French Open when he took a two-sets lead.

Former world number two Haas, who is seeded 24th here, continued his recent renaissance with a 7-5 7-6 4-6 6-3 win to reach the semifinals for the first time.

If Haas can cause a sensation by defeating Federer, he would be one win away from becoming the oldest Wimbledon champion since Arthur Ashe in 1975.

It is seven years since Haas was rated as the second best player in the world but a succession of injuries, including a recurring shoulder problem, have forced his ranking outside the top 30.

After beating Djokovic in the final of the grasscourt tournament in Halle last month, Haas has spent over 10 hours on court at Wimbledon -- much of it in sweltering heat -- to get to this stage for the first time.

The other semifinal will be a battle of the two Andy's, as British third seed Murray and American sixth seed Roddick secured their places in the last four, although they did so in contrasting fashion.

Murray, who was involved in a nail-biting five-set victory over Stanislas Wawrinka on Monday, gave his supporters no such worries this time with a comfortable 7-5 6-3 6-2 victory over Spanish wild card Juan Carlos Ferrero.

"I'm very happy to come through in straight sets because I had a long one the round before," Murray told Press Association Sport. "To get to the semifinals for the first time is nice and I'll try my best to go further.

"There were quite a lot of errors from both of us at the start. I served very well but from the back of the court it was very, very hot out there, and quick, so there were quite a few mistakes early in the match. Once I got the first set I started to settle down and I returned great at the end."

Roddick was on course for victory when he broke in the fourth set after taking a two sets to one lead, but Hewitt defied a leg injury to send the match to a final set.

With the shadows lengthening on Court One, Roddick finally finished off the Australian after three hours and 50 minutes to reach his first semifinal at SW19 since suffering the second of his two successive final defeats to Federer in 2005.

Roddick told the BBC: "I'm super relieved just coming off the court and really, really happy. I haven't really been in the grand slam picture much the last two years and now it's my second semifinal of the year so I'm thrilled right now."

The 26-year-old also paid tribute to his opponent, who has battled back to something like his best form after recovering from hip surgery last year.

"I think Lleyton might have hurt himself a little bit in that fourth set and it's testament to the type of player he is to have kept going and to have made it such a fight," added Roddick.