(CNN) -- South Africa lock Bakkies Botha will miss the final Test against the British and Irish Lions in Johannesburg on Saturday after failing in his appeal against a two-week ban. 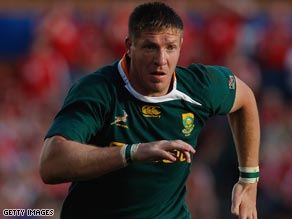 Bakkies Botha will be eligible to return for the start of the Springboks' Tri-Nations campaign.

The 29-year-old was cited for a dangerous charge which left Lions prop Adam Jones with a dislocated shoulder.

Jones was forced off shortly after halftime during last Saturday's second Test in Pretoria, in which the Springboks fought back to snatch a 28-25 victory and clinch a 2-0 series triumph.

The South African management decided to appeal as they felt Botha had legally been trying to clear out a ruck.

Assistant coach Dick Muir said: "We certainly don't see any wrongdoing in that challenge and if it wasn't for the injury which came from it, I don't think anything would have been said about it."

The Blue Bulls forward will return in time for the Springboks' Tri-Nations opener against the All Blacks in Bloemfontein on July 25.

For Saturday's third Test against the Lions, Botha will be replaced by Johann Muller, who captained his Sharks province to defeat against the tourists in one of the warm-up matches.

He gets his chance with Andries Bekker injured and versatile loose-forward Danie Rossouw struggling with concussion.

The Springboks will also be without flanker Schalk Burger, who was banned for eight weeks for eye-gouging Lions wing Luke Fitzgerald.

There was no appeal on that ruling, but the International Rugby Union has pledged to review its punishments for such offenses in the wake of criticism that the player got off lightly.

Last weekend's match-winner Morne Steyn starts in place of fly-half in place of Ruan Pienaar, who has paid for his poor goalkicking form.

Zane Kirchner will make his debut at full-back, while Odwa Ndungane, Jaque Fourie, Wynand Olivier and Jongi Nokwe also come in to the backline.

With Wales center Jamie Roberts joining O'Driscoll on the sidelines due to a wrist injury, England's Riki Flutey forms a new midfield combination with Tommy Bowe, who switches from the wing.

Ugo Monye, dropped after the first Test defeat, returns on the right wing, with world player of the year Shane Williams starts in place of Fitzgerald on the left.

Teams for the third Test: