Serena through to final after epic battle

(CNN) -- Serena Williams fought back from the brink of defeat to stay on course for her third Wimbledon title with victory over Elena Dementieva in the longest women's semi-final in history. 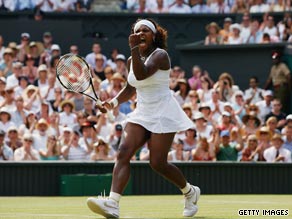 The 27-year-old American was forced to produce all her battling qualities to overcome a spirited Dementieva, who produced a brilliant performance but still bowed out at the last-four stage for the second year in a row.

Williams saved a match point in the second set before forcing a decider and winning 6-7 7-5 8-6 in an epic duel on Centre Court that lasted 12 minutes short of three hours.

"It was really tough," Williams told BBC Sport. "She's been playing so well and has won a lot of matches against me in the past.

"I was not on my best game but my family were so positive. Elena played so well and we gave the crowd a wonderful match."

Dementieva added: "It was a great match from both of us and it was a very satisfying match to play in. Last year I didn't play well in my semifinal against Venus but I made amends this time.

"I loved the atmosphere and the support from the crowd. I had my chance at match point but I should have gone down the line with my passing shot, which proved to be a big mistake."

Serena will now play older sister Venus in Saturday's final, the fourth time the pair have met in the women's climax, after the defending champion crushed top seed and world number one Dinara Safina 6-1 6-0.

Olympic champion Dementieva, who had won three of the pair's last four meetings including the Beijing final, defied predictions of a one-sided encounter by breaking the American in the first game although Williams hit straight back.

The Russian bravely fought off three break points in the eighth game before going on to dominate the tie-break despite a nervous double fault on the first of three set points.

Williams, stung by the Russian's all-out assault, broke straightaway in the second set and was quickly 2-0 ahead. But Dementieva refused to yield and broke back to love in the sixth game for 3-3.

Williams, bidding to reach a fifth Wimbledon final, fought off two break points in the eighth game, but nipped ahead on a break to 6-5 when the American successfully challenged a ball which had been called good by the linesman.

Dementieva wasted four break points in the 12th game and was made to pay when Williams sent down a 12th ace to level the contest.

The Russian broke a weary-looking Williams to lead 3-1 in the decider, but handed the advantage straight back with a tense service game.

Williams, with the experience of having won 10 grand slam titles in her career, saved a match point in the 10th game with a backhand volley.

The 2002 and 2003 champion capitalized on her escape by breaking to lead 7-6 and took the match when Dementieva pushed a return wide.