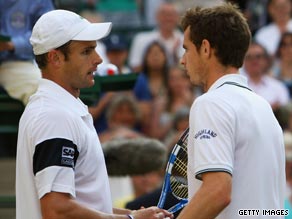 Roddick (left) and Murray embrace after the American prevailed in a classic Wimbledon semifinal.

Third seed Murray was hoping to become the first British man to win the tournament since Fred Perry in 1936, but he was eventually out-gunned by an inspired Roddick who went through 6-4 4-6 7-6 7-6.

Roddick will now face Roger Federer, who has beaten him in their two previous Wimbledon final meetings -- in 2004 and 2005.
Federer profile: One of the greatest.

"I had to play my very best tennis to win. I can't say enough good things about Andy, he played so well, but I can play well sometimes too," Roddick told BBC Sport.

"Not many people gave me a chance before the match, but I knew I could win. Throughout my career I have had many shortcomings but trying hard is not one of them.

"In fairness, he had all the pressure on him -- and that probably helped me a bit. I played very very well and it's a dream to reach another grand slam final after a couple of barren years."

Murray was punished for being too passive in the opening set and, although he bounced back in the second, Roddick's bullet serving and consistent all-round game earned him a third Wimbledon final appearance against Federer.

The pressure of the match showed on the British number one: in the third set Murray was warned for bad language.

Murray told a news conference: "You always expect your opponents to play well at this stage of the tournament. I had a few chances in the first tie-break and also had chances early in the third set and I didn't take any of them.

"I thought I played well, but he served really, really well. He was serving at a high pace and at such a high percentage, sometimes there's not a whole lot you can do."