Profile: Roger Federer - The greatest ever

(CNN) -- Roger Federer is undoubtedly the greatest men's tennis players of the modern era -- if not of all time -- following his epic victory over Andy Roddick in Sunday's Wimbledon final. 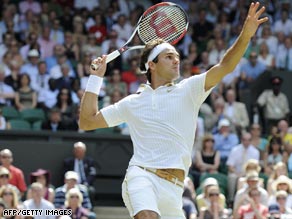 Reaching for the stars: Roger Federer ithe best tennis player the world has ever seen.

His star had waned somewhat in the past year, losing his No. 1 world ranking to Rafael Nadal, but his breakthrough victory at the French Open last month saw him match Pete Sampras with 14 titles at major tournaments.

With the injured Nadal absent at SW19, Federer rolled back time to march relentlessly into the final against Roddick, dropping just one set along the way as he reminded fans of the form that saw him top the rankings for a record 237 weeks.

Then on Sunday, Federer overtook Sampras' mark with 15 grand slams -- with the American in attendance to view his record finally go.

Federer still has some way to go before beating Sampras' all-time record of 286 weeks at the summit, but at the age of 27 he has plenty of time to take back his crown from Nadal, especially with the Spaniard's career seeming in the balance due to his chronic knee problems.

The Swiss is already the ATP Tour's all-time earner, with more than $48 million in prize money. He holds the record for most money earned in one season, $10 million in 2007, and is also second on the list for his $8 million the year before.

Sampras, in comparison, is second on the earnings list with $43 million up until his retirement in 2002 after a 14-year career.

He won 64 ATP Tour titles, compared to Federer's 59, but both are a long way behind the record 109 achieved by Jimmy Connors, with Ivan Lendl next on 94 and John McEnroe third with 77.

When it comes to Grand Slams, Sampras won 14 finals and lost four. Including Sunday, Federer has reached the most, appearing in 20.

Lendl, who held the world record for 270 weeks at No. 1 before being usurped by Sampras, appeared in 19 finals but could only win eight.

The great Bjorn Borg, who shares the record for most successive titles at Wimbledon with Federer -- who completed his quintet in 2007 - won 11 of his 16 Grand Slam finals.

None of those illustrious names have been able to surpass the efforts of Australian legend Rod Laver, who is the only men's player to have won all four Grand Slams twice in the same year.

Federer became the first player to reach seven consecutive Wimbledon finals with his 50th win at the All England Club in his semi-final victory against Tommy Haas on Friday, but still trails Sampras' record of seven titles at SW19.

His bid for a record sixth successive crown was thwarted in an epic final showdown last year with Nadal, who has transformed himself from a clay-court specialist into a fearsome all-round talent.

Federer, by contrast, has taken a long time to adapt to clay. He did not reach the semi-finals at Roland Garros until his seventh appearance in Paris, then was beaten in the final by Nadal for the next three years.

His triumph this year came after the Olympic champion suffered a surprise early exit, although he had earlier ended Nadal's 33-match winning streak on clay in the Madrid Open final.

The anxiously-anticipated Paris win made him just the sixth player to complete the set of major titles, the third in the modern era and the first since Andre Agassi -- who added the final piece in his jigsaw with victory at the 1999 French Open.

Federer shares the Open-era record for most U.S. Open victories with Sampras and Connors, having clinched his fifth crown in 2008 when he beat young pretender Andy Murray in the final.

He has always been generous in his praise of Sampras, who never won at Roland Garros but triumphed twice at the Australian Open and holds the record for winning eight successive Grand Slam finals.
Sampras: Federer is the greatest.

"I think his success here at Wimbledon is amazing," Federer has said of Sampras. "Winning it three times, coming back, winning it four more times and going for five, it's quite something.

"And he finished off with the U.S. Open victory, which was very special against his biggest rival Andre Agassi. I think that's what I'll remember most of him.

"I guess he had the best serve we've seen in tennis history, even though today we also have some good ones. He was also a smooth mover which he never really got credit for. There's many things that Pete did incredibly well."

Federer's career has been no less incredible, but he has claimed that he started out with no such lofty ambitions.

"I'm very proud of all the records I've achieved because I never thought I would be that successful as a kid," he said.

"I would have been happy winning a couple of tournaments and maybe collecting Wimbledon."