(CNN) -- Lance Armstrong has failed by under a second to take the yellow jersey in the Tour de France, after the American's Astana team powered to victory in the 39km fourth stage team time-trial around Montpellier. 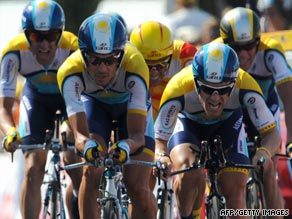 The Garmin team split that pair by taking second place, despite only finishing with five riders together -- the minimum needed to clock a finish.

The result means Swiss Cancellara keeps hold of the race lead by the slenderest of margins, with 2007 champion and Armstrong's team-mate Alberto Contador in third place, 19 seconds behind the leading two.

Andreas Kloden and Levi Leipheimer make up the top five to ensure that four Astana riders are at the head of affairs.

Germany's Tony Martin, whose Columbia team finished fifth, 59 seconds off the lead, started the day second overall but has dropped down to eighth position -- 52 seconds off the pace.

Armstrong admitted he saw himself in yellow as Astana closed in on victory. "We thought we had it based on the time splits on the course," he told Eurosport TV.

"We thought we were close or even there but that's cycling. We can look at our performance and say we did our best. We won the stage and made time on our rivals. I did my best, it's just a hard event, one of the hardest things we do in the Tour."

This was the Tour's first team time-trial since 2006 and the windy conditions made it tough for the early starters.

Four members of the Bouygues Telecom team also careered off the road on a turn a third of the way through their journey.

Cancellara is expected to hold onto his yellow jersey until Thursday's stage, which finishes on the spectacular Montjuic climb in Barcelona, where Armstrong and Contador will both fancy their chances of taking the overall lead.