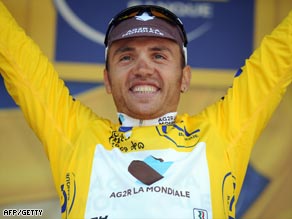 Feillu was part of a breakaway group which included Italian Rinaldo Nocentini, who ended Friday as an unlikely race leader after finishing in fourth place on the 224 kilometer stage from Barcelona to Arcalis.

Behind the breakaway, the race favorites were engaged in a test of strength and it was Armstrong's Astana teammate Alberto Contador who sped clear of his rivals with an incredible change of pace.

By the finish at the ski station the Spaniard had gained a crucial 21 seconds on Armstrong, overtaking him in the overall standings.

But 31-year-old Tuscan Nocentini, who rides for the AG2R team, gained enough time on the stage to hold a six-second advantage over Contador, with Armstrong eight seconds back in third place.

Armstrong had started the day in second, with the same time as overnight leader Fabian Cancellara, who cracked on the final climb to Arcalis and came in several minutes down.

Feillu, racing in the Tour for the first time and the brother of Agritubel teammate Romain, attacked his fellow breakaway riders with just under six kilometers go to and stayed clear for a memorable victory.

The group had gained over 12 minutes on the main peloton, but the advantage came down dramatically on the final climb as the Astana team set a fierce pace on the front of the chasing bunch.

Cancellara was soon distanced before Australian Cadel Evans, a two-time Tour runner-up, made an unsuccessful bid to gain time in the battle for yellow.

It came to nothing, but Contador bided his time until the final two kilometers as he stood up on his pedals to dance clear.

He quickly opened a gap on Armstrong and sent the clearest message to his teammate that he wants to be wearing the yellow jersey in Paris in two weeks time.

With four riders in the first six overall, Levi Leipheimer is fourth and Andreas Kloeden sixth, Astana look well-placed to strengthen their grip on the race over the next two days in the Pyrenees.

Questions remain about who is the team's preferred contender for yellow, but Contador batted them away.

"I'm really tired of the question about leadership at Astana, he told the official Tour Web site www.letour.fr.

"Let's just watch the Tour and see what unfolds and hopefully it will be clear by the end of the race.

"I know the road to Arcalis. This is my terrain as well, when I'm in the mountains it's like I'm at home."

Armstrong acknowledged the good form of his rival on his Twitter blog.

"AC (Alberto Contador) attacked in the final k's and gained some time on the front group. He was going well," he said.