(CNN) -- Brazilian authorities detained the wife of former world boxing champion Arturo Gatti as a suspect in his killing, according to local reports. 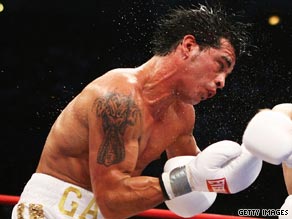 Arturo Gatti pictured during the final fight of his career, a knockout defeat by Alfonso Gomez in 2007.

Gatti was found dead Saturday in a hotel in Brazil, where he was taking a vacation with his wife, Amanda Carina Barbosa Rodrigues, and their young child.

The 37-year-old Canadian, who was born in Italy and made his name as a fighter based in New Jersey, was staying in the northeast seaside resort of Porto de Galihnas.

Rodrigues, 23, was being held in a police station in the city of Recife in connection with the killing, a police official in Porto de Galihnas told CNN.

"This crime is being investigated by our homicide experts and we hope to have more answers tomorrow," Santiago said.

Police recovered a blood-stained purse strap from the scene, according to media reports.

Gatti made his name in a series of three fights against "Irish" Micky Ward, losing the first but triumphing in the other two.

He held the IBF super-featherweight and WBC light-welterweight titles, and he also won the WBC junior welterweight belt but lost it to Floyd Mayweather Jr. in 2005.

Gatti retired in 2007 after suffering a knockout defeat by Alfonso Gomez in his comeback, ending with a record of 40 wins and nine losses.

He grew up in Montreal, Quebec, after leaving Italy at an early age, and returned to the city following his retirement.

According to Gatti's official Web site, the Italian-born pugilist won "Fight of the Year" for three consecutive years.