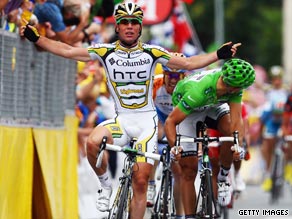 Mark Cavendish celebrates his victory on the 10th stage ahead of green jersey holder Thor Hushovd.

Team Columbia rider Cavendish again proved he has no equals in a bunch sprint finish, comfortably crossing the line ahead of rival Thor Hushovd with American Tyler Farrar back in third place at the end of the 194.5km 10th stage from Limoges to Issoudun.

There was no change in the top three with Italian Rinaldo Nocenti finishing in the peloton to remain six seconds ahead of 2007 champion Alberto Contador, with seven-times winner Lance Armstrong a further two seconds behind in third.

However, there was a shuffling of the pack behind them with fourth-placed Levi Leipheimer and fifth-placed Bradley Wiggins losing 15 seconds after failing to register the same time as the peloton.

This means Andreas Kloden moves up to fourth, with Leipheimer fifth, meaning places second to fifth are now taken by riders from the Astana team.

Tuesday's stage, the first of five transition stages before the race hits the Alps, saw three French riders in a four-man breakaway, aiming to claim the honor of winning on Bastille Day.

With no radio contact allowed on this stage between riders and team cars -- an experiment to be repeated on the 13th leg -- the riders were aiming to control the escape before setting up a sprint.

Of the 20 teams competing in this year's Tour, 14 submitted official complaints about the communications ban.

Samuel Dumoulin, Thierry Hupond, Benoit Vaugrenard and Russian Mikhail Ignatiev broke clear after just 5.5km and were left alone at the front of the race until the final two kilometers, when the Team Columbia-led peloton swept them up before putting Cavendish in the perfect position to claim another stage win.

Cavendish told the official Tour Web site: "It was a technical finish with a lot of corners and sections that were slightly uphill, but we had a dominant team with all nine guys riding at the front in the finish."

The 24-year-old, who won four stages in 2008, is now just six points behind Norwegian Hushovd in the race for the green points jersey.

"Like you saw today, I'm not going to go for the intermediate sprints but I'm going for stage wins, and hopefully the green jersey will come with that. I just want to get to Paris and win on the Champs-Elysees," he said.

Hushovd was not so happy with his own finish.

"Today it was a really hard sprint. Columbia went really fast again and it was really tricky with about 500 meters to go," he said. "I braked a little bit too much and I lost four or five meters on Cavendish and I had to spend too much energy to close the gap.

"There was one point in the sprint where I understood that I could never get past Mark so I had to fight for the second place. When I looked behind I saw it was no trouble. I'm happy to get the points for the green jersey, but I'm not happy to get second."