(CNN) -- Mark Cavendish regained the green jersey with another blistering sprint finish to win the 11th stage of the Tour de France in Saint Fargeau on Wednesday. 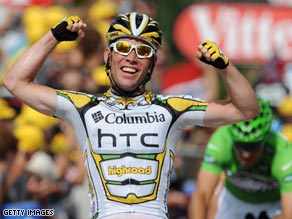 It was the fourth stage victory of this year's race for the Team Columbia High Road star, matching his achievement on last year's Tour.

It also draws his level with Barry Hoban for the all-time record of eight wins by a British cyclist.

Cavendish is proving virtually unbeatable in the bunch sprints and the 35 points he gained for crossing the line first put him back in green as Thor Hushovd, who held the jersey overnight, faded to fifth in an uphill finish.

There was no change in the overall leading positions with Italian Rinaldo Nocentini keeping the yellow jersey as he stays six seconds ahead of 2007 Tour champion Alberto Contador with seven-time winner Lance Armstrong a further two seconds back.

Wednesday's 192km leg from Vatan followed a similar pattern to the 10th stage, with a two-man breakaway reeled in towards the finish.

Cavendish's teammates again dominated the front positions in the closing kilometers and he was able to easily hold off the challenge of Hushovd and then second-placed Tyler Farrar in the race for the line.

"It was great, it was hard finish uphill, but we knew what we had to do," the British star told Eurosport.

Cavendish is expected to get further chances for victories before Sunday's stage to Verbier in the Alps where the battle for the yellow jersey is expected to restart in earnest.

He told CNN before Wednesday's stage that he is concentrating on reaching Paris to win on the Champs Elysees, but he admitted that wearing the green jersey was an honor.

"Its an emotional thing to wear it," he said in an exclusive interview.

"It's one of the biggest things a sprinter can do an I don't take anything away from the pride I had in wearing it."

With the jersey now back in his possession, Cavendish will look to extend his lead over Hushovd on Thursday's stage 12 over 211.5 kilometers from Tonnere to Vittel.