(CNN) -- Double Olympic champion Tirunesh Dibaba will compete over 5,000 meters at the London Grand Prix next weekend as she takes to the track one final time before the world championships in Berlin. 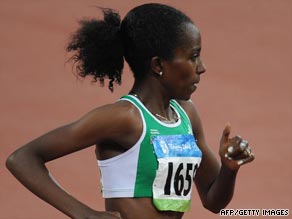 Dibaba is competing in London in preparation for next month's world athletics championships in Berlin.

The Ethiopian, a four-time world champion, made history at the Olympic Games in Beijing last year when she became the first female athlete to win both the 5,000m and 10,000m.

Dibaba has only had one outing on the track so far this season, finishing second behind Kenya's world cross country silver medallist, Linet Masai, in New York back in May.

That race followed a lay-off of six months over the winter and her race on Saturday will be only the second time Dibaba has competed in London - the first being three years ago when she set a still standing personal best of eight minutes 29.55 seconds to win the 3000m.

Dibaba told Press Association Sport: "I ran very well the last time I was in London and I enjoy running here very much.

"The London Grand Prix is important for me as a final test before the world championships. I hope to give everyone a preview of Berlin."

"This will only be my second race this season and I want to do my best to run a fast time before the world championships," she added.