(CNN) -- Stewart Cink claimed the British Open title with an emphatic playoff victory over 59-year-old fellow American Tom Watson who was bidding to become the oldest man to win a major golf title. 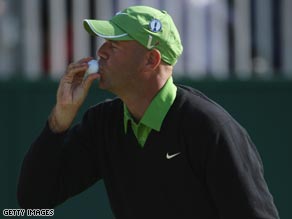 Cink kisses the ball after his crucial birdie putt on the 18th.

Watson had missed an eight-foot par putt on the final hole of regulation play to see his hopes of winning the Claret Jug for the sixth time cruelly dashed.

A weary Watson was never a factor in the four-hole playoff, immediately falling behind to a bogey on the 5th and running up a double bogey on the 17th.

Cink, who was winning his first major title, carded a final round 69 to set the clubhouse pace on 278 - two-under-par.

Watson, in the final group, birdied the par-5 17th to go to three-under and needed a par on the final hole to complete a fairytale victory.

His second shot looked set to end close to the flag.

But it went through the back of the green and eventually left him facing a tricky putt to win his ninth major and create golf history.

His weak effort never troubled the hole and gave Cink an opportunity he seized with both hands in the playoff, finishing one-under for the extra holes.

The 36-year-old Ryder Cup star said it had been an "extraordinary" day.

"It just tips the iceberg," he told BBC Sport.

"It has been a surreal experience for me, playing a wonderful tournament on a wonderful course against Tom Watson.

"I grew up watching him. He has turned back the clock. I feel so happy just to have been a part of it, never mind having won."

English pair Chris Wood and Lee Westwood also had chances of victory, both standing two-under playing the last, but both made bogeys to finish in a tie for third at one-under.

Watson, who also won the 2003 British Seniors Open at Turnberry, served notice of his intentions with a superb-five under 65 in benign conditions on the opening day.

Most expected him to fall by the wayside, but he followed with a level-par 70 to share the halfway lead with Steve Marino and battled to a 71 on day three to go into the final round with a one-shot advantage.

Ryder Cup star Cink, who had started with a 66, was three shots behind at the start of the day, but gradually moved into contention on the back nine.

A missed birdie chance on the 17th appeared to have put paid to his victory hopes, but a superb 15-foot birdie putt on the last re-ignited his challenge.