Watson proves golf is a game for old men ...

(CNN) -- Many saw the renaissance of American golfer Tom Watson at the recent British Open in Turnberry, as clear evidence that romance is alive and kicking in one of the world's most ancient of games. 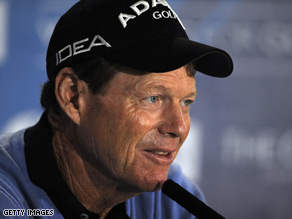 Little over a month shy of his 60th birthday, the winner of eight career majors defied the odds and the skeptics, to not only lead the championship for much of the duration, but to obdurately defy his advancing years and effects of a hip-replacement to come within a whisker of winning the Claret Jug for a sixth time.

Somehow the wily wisdom of Watson provided the perfect approach to the infamously tough Turnberry links that had proved too much of a challenge for many a younger contender. But was this romance or just further proof that golf really is an old-man's game? Let us know your thoughts in the Sound Off below.

It is maybe hard to swallow for fans of the pitch and putt but where else is the red-hot heat of global competition for one of the game's most desired trophies fought over by a man nearly three times older than some of his fellow competitors?

Watson talks to CNN about his near miss. »

World number one Tiger Woods was not just tamed but embarrassed. Buffeted by the stiff, salt winds of the shoreline course, the task proved too tough for the 33-year-old - who missed a cut, for the third round, for only the second time in his professional career. The casualty list of whipper-snappers who withered away was long and included pre-tournament hopefuls Paul Casey, Padraig Harrington and Sergio Garcia among the numbers.

Watson showed guts and great talent to come within a shot of winning the coveted trophy. Fans were captivated by the way the weather-beaten Stanford graduate, who last won a major in 1983, could roll back the years to evoke his famous victory on the same greens in 1977. A true great of the game and another vintage performance for a gracious man. But did the culmination of the Open not just highlight the fact that golf is less a pursuit of athletes and more an energetic game of chess with a bit more grass?