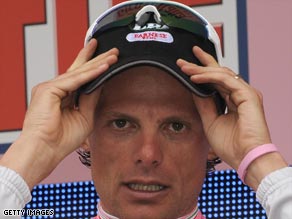 Di Luca is facing an automatic two-year suspension after testing positive for CERA at the Giro d'Italia.

The 2007 Giro champion, who finished second to Denis Menchov in this year's race, returned two positive blood samples -- on May 20 and 28.

The 33-year-old, who won two stages, has been suspended until the Italian Cycling Federation holds a disciplinary hearing.

A UCI statement read: "These adverse findings were a direct result of a targeted test program conducted on Mr Di Luca using information from his biological passport's blood profile, previous test results and his race schedule."

Di Luca is the latest Italian cyclist to test positive for CERA -- an advanced version of the blood-booster EPO -- after Riccardo Ricco, Leonard Piepoli and Davide Rebellin all failed tests in the past year.

The LPR Brakes rider is not competing in the Tour de France.

Di Luca told he reporters he was clean, saying: "Would I be so stupid as to take CERA at the Tour of Italy one year after (Ricardo) Ricco, (Emanuele) Sella and (Davide) Rebellin were caught.

"I've fallen from the clouds, it's really very strange, so much so that I couldn't say how I feel. A two-year ban would be a terrible penalty for me which would force me to retire.

"For me it's important now to have the B samples tested in a different laboratory to the one in Paris because I've heard they use some very strange methods.

"How do I feel? How should I feel? I know what's awaiting me. But most of all I know that if it's confirmed this will be the end for me."

Di Luca was due to take part in the Brixia Tour in Italy on Thursday and had been targeting the world championships at the end of September in Mendrisio, Switzerland.

It is not Di Luca's first brush with anti-doping laws. He was banned for three months in 2007 following a hearing of the Italian Olympic Committee (CONI) for his ties to banned doctor Carlo Santuccione.

In April 2008, Di Luca was acquitted by CONI following insufficient evidence after an abnormal control during his 2007 Tour of Italy win.

This new generation form of EPO was first detected last summer when Ricco, second in the 2008 Giro, was caught during the Tour de France.