(CNN) -- Alberto Contador has moved closer to his second Tour de France victory in three years after finishing second to Luxembourg's Frank Schleck in the gruelling 169.5km 17th stage of the race from Bourg-Saint-Maurice to Le Grand-Bornand. 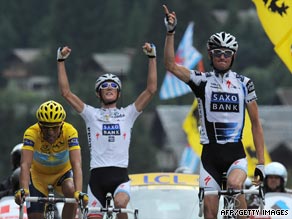 Contador, Schleck and the Saxo Bank rider's younger brother Andy, broke clear of their rivals on the ascent of the Col de Romme, the third of four category one Alpine climbs on the day, to cross the line two minutes and 18 seconds clear of Italian Vincenzo Nibali and seven-times Tour winner Lance Armstrong.

The result means Armstrong slips from second to fourth place overall as his Astana teammate Contador now leads Andy Schleck by two minutes and 26 seconds in the overall classification, with Frank Schleck a further 59 seconds back in third.

American Armstrong started the day just one minute, 37 seconds behind Spaniard Contador but battled hard to restrict his losses. He is a further 30 seconds behind the elder Schleck, although is expected to reclaim his podium place following Thursday's 40.5km time-trial around Annecy.

Another Astana rider Andreas Kloden is fifth overall -- 4:44 behind Contador --after initially breaking away with the three leaders before suffering on the final climb of the Col de la Colombiere and then being dropped by Nibali and Armstrong on the downhill run to the finish.

The hardest stage of this year's race saw the peloton smashed to pieces from the very first climb of the Cormet de Roselend and there were huge time gaps at the finish with the Tour hopes ending for a host of contenders.

Defending champion Carlos Sastre finished down in 25th place, nearly eight minutes behind Schleck, after bravely trying to attack his rivals on the Col de Romme -- before slipping back and then suffering a puncture at a crucial time. The Spaniard is down in 13th place in general classification.

Meanwhile, Cadel Evans, the runner-up for the past two years, had another disastrous day as he finished a lowly 81st on the day, nearly 30 minutes off the pace.

Evans, who lost time on Tuesday's stage, finished in the 'grupetto', the group formed by the non-climbers who work together to limit their losses, and is now 32nd in the overall classification -- over 37 minutes down on Contador.

"My plan was to do the same thing as in Verbier -- attack and still have an advantage over my rivals," Contador told the official Tour Web site.

"But the Schleck brothers were very good and I found myself at the front of the race along with them. My team had planned to attack again with Kloden on the last climb but when I accelerated, he could not follow."