(CNN) -- Seven-time Tour de France champion Lance Armstrong has announced that he will race for a new U.S.-based team next year. 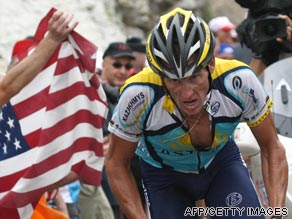 Cycling legend Lance Armstrong will leave Astana to form his own team for the 2010 season.

The legendary Texan cyclist will form a new franchise in partnership with American electronics retailer RadioShack.

The 37-year-old made his cycling comeback this year with the Kazakhstani Astana team to raise awareness about cancer through his LiveStrong Foundation charity.

His title hopes in this year's Tour faded further when he lost another 90 seconds to leader and teammate Alberto Contador in Thursday's 18th stage.

"This has been a great season so far -- the response in the countries we've been to has been amazing and it's clear now that this was the right choice," said Armstrong, who will compete for team RadioShack in cycling, running and triathlon events, including the 2010 Tour de France.

"Utilizing the massive media attention that the sport receives has been the perfect vehicle to help spread the LiveStrong message around the world.

"To be able to compete for an American team comprised of the world's top cyclists, supported by the best coaches and staff -- I couldn't be happier to partner with RadioShack, a truly iconic American brand."

Armstrong's return to Astana caused some friction with 2007 Tour de France champion Contador, as the Spaniard bristled at any suggestion that he would be usurped by the American as team leader.

Contador has dominated his teammate in the race, winning Thursday's time-trial to build a lead of more than five minutes over third-placed Armstrong with just three stages remaining.

Armstrong was treated for testicular cancer in 1996, but recovered to come back stronger than ever and won the Tour for the first time in 1999.

He retired in 2005 after his seventh victory, but announced last September that he would return to cycling -- and stated that he would post his blood tests online after being angered by allegations that he had used performance-enhancing drugs.

Contador moved closer to a second Tour de France title in three years with victory in Thursday's time-trial, while Armstrong's slim hopes faded despite moving up into third place.

Contador is now four minutes and 11 seconds ahead of Saxo Bank's second-placed Andy Schleck going into the final three stages, with Armstrong 5:25 off the leading pace and a third Astana rider, Andreas Kloden, moving up to fifth behind Britain's Bradley Wiggins.

The Spaniard was one of only two riders to complete the 40.5 kilometer course at a speed over 50km/hour, finishing three seconds faster than Olympic time-trial champion Fabian Cancellara.

Armstrong was 16th, while Schleck came home in 21st after falling a further 1:45 off the yellow jersey.

Kloden was ninth to edge past stage 17 victor Frank Schleck in the overall standings, with the Saxo Bank rider -- older brother of Andy -- back in 35th.

The younger Schleck, who leads the youth classification, was not too disheartened despite seeing Contador stretch his lead.

"It's still not all over. We're still going to be active on the Ventoux. We want to have two Schlecks on the podium in Paris -- that's the goal of the team and we haven't given up yet," the 24-year-old told the Tour's official Web site.

"Frank kind of expected to lose a bit of time today and maybe his third-place position that he earned yesterday. That's happened but anyway, he's still in excellent shape.

"I think I did a good time trial. Once again today I'm impressed by Alberto's performance. To win a time trial like that, in the yellow jersey, is proof that he's the strongest right now."