(CNN) -- Mark Cavendish claimed his fifth stage victory on this year's Tour de France as he again proved himself the fastest man in a bunch sprint after the 178 kilometers from Bourgoin-Jallieu to Aubenas. 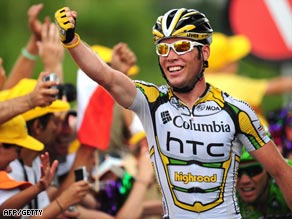 Cavendish punches the air with delight after his stage 19 triumph.

Cavendish held off his green jersey rival Thor Hushovd while Alberto Contador finished in the safely in the main bunch to retain the yellow jersey with two stages remaining.

The second category climb of the Col de l'Escrinet just before the finish was expected to leave Cavendish at a disadvantage, but the Team Columbia rider rode superbly towards the front of the main peloton, closely tracked by Hushovd.

Cavendish's Team Columbia teammate Tony Martin worked to the very limit to lead him into the final kilometer before the British star hit the front and crossed the line in triumph.

An emotional Cavendish was almost lost for words after his latest victory which leaves him the most successful British rider in the Tour de France with nine stage wins.

"That will go down as the most memorable win in my career," he told Eurosport.

"I was painful hanging in there (on the climb) it was just so hard.

"I gave it absolutely everything going for the line. I'm so happy it's made up for the disappointments of the last week."

Cavendish was involved in a war of words with Cervelo rider Hushovd after being disqualified in a sprint finish last Saturday.

It cost him valuable points in the battle for the green jersey which Norway's Hushovd still holds heading into the final showdown on the Champs Elysees on Sunday.

Before that comes Saturday's 167 kilometer stage from Montelimar to Mont Ventoux where Contador is expected to seal his second Tour de France victory in the fearsome uphill finish.

Armstrong showed his experience by tracking the sprinters to the line on Friday's stage to take 12th place and gain four seconds on his podium rivals, including fourth-placed Bradley Wiggins, who finished in the same group as Contador and Schleck as the bunch split in the closing stages.

Armstrong, who announced on Thursday that he was setting up his own team next year, holds a 15-second advantage over British rider Wiggins in the battle for the final podium place on his Tour comeback.