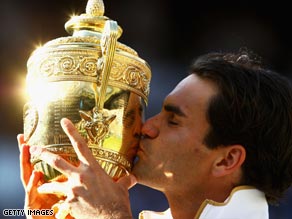 Federer was tasting victory at Wimbledon for the sixth time.

The world number one broke the news on his personal Web site www.rogerfederer.com and his Facebook page.

"I have some exciting news to share with you," he said.

Federer, who won a record 15th grand slam title at Wimbledon earlier this month went on: "This is the greatest day of our lives. Mirka, Myla and Charlene are all healthy and doing very well."

His Web site was immediately flooded with congratulatory messages, with one reading: "here comes the future tennis players!!"

With such a pedigree, Mirka is a former tennis professional, British bookmakers were already guarding against such an eventuality.

Federer profile: One of the greatest.

Ladbrokes is offering 100 to one for either girl winning Wimbledon one day and 25-1 against a grand slam triumph in any of the four majors.

"Wait 15 to 20 years. The Williams sisters will look like a joke compared to the Federer sisters," another said.

The 27-year-old Federer met Slovakian-born Miroslava "Mirka" Vavrinec in 2000 when they were both competing for Switzerland in the Sydney Olympics.

They were married in Federer's hometown of Basel in April this year.

The Swiss maestro celebrated by winning his first French Open title in May and regained his Wimbledon crown after an epic five-set victory over Andy Roddick.

Federer is due to return to action in Montreal next month ahead of his bid for the U.S. Open at Flushing Meadows.