(CNN) -- Alberto Contador is on the verge of winning his second Tour de France in three years after finishing fourth to fellow-Spaniard Juan Manuel Garate in the arduous 20th and penultimate 167km stage to the top of Mont Ventoux. 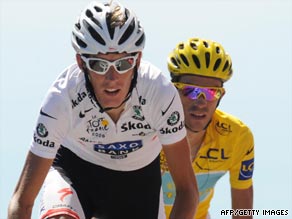 Contador came home alongside his rivals for overall victory as the stage turned into a tactical battle between the race leaders while the two remnants of an early 16-man breakaway group, Garate and Germany's Tony Martin, battled it out for the glory of finishing first at the top of the 'Giant of Provence.'

Garate eventually won his duel with Team Columbia's Martin by three seconds, giving Rabobank their first stage victory in what has been a disappointing Tour for the Dutch team.

However, the real story was developing behind them as second-placed Andy Schleck launched a series of attacks in an attempt to distance third-placed Lance Armstrong -- with the aim of getting his older brother Frank, who began the stage in sixth position, onto the podium.

Despite Luxembourger Schleck again showing his strength in the high mountains, seven-times Tour winner Armstrong dug deep to survive the onslaught as the top three remained in the same order as they began the stage.

Schleck and Contador crossed the line third and fourth, 38 seconds behind Garate, with Armstrong a further three seconds behind and Frank Schleck two more seconds adrift.

Contador's dominance in the final week of the race gave him a cushion of over four minutes on Andy Schleck, but Astana teammate Armstrong's position was in danger, with third to sixth place separated by under 40 seconds.

However, the 37-year-old American never looked in danger of cracking, and will claim a place on the podium in a remarkable return after last competing in the Tour in 2005.

Meanwhile, Bradley Wiggins suffered in the final 2km of the epic ascent and finished just over a minute down in 10th position, but he did enough to retain fourth place overall from the elder Schleck, by a mere three seconds.

Wiggins' transformation from multiple Olympic champion and superb time-trialist to overall Tour contender has been one of the stories of the race and barring accidents in Sunday's ceremonial final stage into Paris, he will equal the best-ever final Tour position by a Briton, achieved by Scottish climber Rober Millar in 1984.

Stage winner Garate could barely disguise his joy at claiming a famous victory. "I am very proud because the team has tried every day to win a stage at this year's Tour," he told the race's official Web site.

"Today was the last chance and I have found what we were looking for. It is a very new experience for me.

"Yesterday evening I was doing an interview with a radio station and explaining that it would be dream to win on the mythical Mont Ventoux -- and now it's happened. This is paradise!"