(CNN) -- Alberto Contador has been crowned Tour de France champion for the second time in three years, as Mark Cavendish won his sixth stage of this year's race with victory in the 21st and final stage, finishing in the center of Paris. 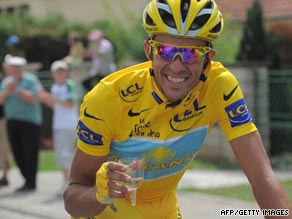 British cyclist Cavendish again proved he has no equal in the bunch sprints by powering away from his rivals, after being giving a perfect lead-out by Columbia teammate Mark Renshaw, to add the 'blue riband' sprinters stage on the Champs-Elysees to his growing list of big race victories.

Cavendish had always stated that winning on the Parisian avenue was his lifelong ambition, although his numerous victories did not prove enough for him to take the green points jersey, which was won for the second time by Norway's Thor Hushovd -- who finished sixth on the day.

Hushovd, who also won the jersey in 2005, finished on 280 points, 10 clear of Cavendish with Germany's Gerald Ciolek third in that competition. However, Cavendish would undoubtedly have taken the honor if he had not been disqualified from the points he won on stage 14 for a dangerous sprint.

"I think I won this jersey because I'm more experienced. I know how to win it. I've done it before and I fought for the jersey for many, many years," Hushovd told the race's official Web site.

"Cavendish is the fastest sprinter but I'm the most consistent one, and that's why I won this jersey. His goal is to win the green jersey and I know he's going to win many of them in the future, but I'm going to give him a big fight in the next few years."

Meanwhile, Contador finished safely in the bunch in 97th place, maintaining his lead of four minutes and 11 seconds, to add the title to his 2007's victory in cycling's premier event.

With the final stage largely ceremonial, apart from the bunch sprint at the end, Contador secured his victory by sticking closely to principal rival Andy Schleck on Saturday's punishing penultimate stage to the top of Mont Ventoux.

The Spaniard, who was prevented from competing in last year's race because his Astana team were not invited due to doping infringements by former riders, has now claimed four successive grand tours after also winning last year's Giro d'Italia and Vuelta Espana.

"My thanks go out to many people after achieving this victory. I want to express my appreciation to all those who supported me as well as all the riders who rode the Tour in 2009," he said.

"On a personal level, I had a difficult Tour and now I'll be sure to enjoy this win. I'm extremely happy. The last day was great. Unbelievable! The champagne was good. At times I felt like a child again. I feel a great sense of relief, a release of tension. Next year it will be different, perhaps less complicated than this time."

Schleck maintained his second placing overall, while Contador's teammate and seven-times champion Lance Armstrong was 5:24 behind in third place.

Armstrong's astonishing performance, in his first Tour since claiming his seventh successive victory in 2005, proved one of the stories of the race -- even if stories of internal strife between the American and Contador dominated proceedings for the majority of the race.

Next year the Texan will be racing for a new U.S.-based team that he is forming in partnership with electronics retailer RadioShack.