(CNN) -- Felipe Massa's Formula One career is hanging in the balance after confirmation the Ferrari driver suffered some damage to his left eye following his crash in qualifying for the Hungarian GP -- although his condition continues to improve. 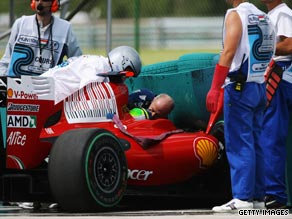 The Brazilian remains in intensive care at the AEK military hospital in Budapest after suffering a skull fracture following his freak 200kph accident at the Hungaroring on Saturday.

Despite the 28-year-old showing significant signs of improvement after undergoing emergency surgery, it has now emerged he may have sustained eye problems.

If that is the case, and the Brazilian is unable to see properly in the future, it will mean his career in Formula One is over.

Professor Robert Veres, the surgeon who operated on Massa over the weekend, told reporters: "He has suffered some damage to the eye. We don't know if he'll be able to race again.

"It's too early to say about his future as we don't know the extent of the damage. Without an operation it's very hard to evaluate the eye's function."

Meanwhile, doctors have confirmed that Massa is on the road to recovery and delivered an optimistic outlook in a Monday evening press conference.

"In the last 24 hours some major changes have gone through in the condition of Felipe Massa," said Colonel doctor Lajos Zsiros. "His condition continues to be stable."

Massa has been taken out of an induced coma and is responding to questions. "As we speak he is sleepy, but he gives adequate answers to the questions we ask him, and he can move his arms and legs spontaneously," Zsiros added.

"Right now he has no fever, and we have removed the drain tube from his wound. Further improvement of his condition can be expected. During the night we do not plan to do any more interventions on him."

Meanwhile, Peter Bazso, the medical director of the hospital, exclusively told CNN that Massa's injuries had been "life-threatening".

Bazso said he had watched Saturday's accident on television and his team, who specialize in brain injuries, was immediately put on standby to operate as Massa was airlifted to his hospital.

The surgeon and his team performed a two-hour emergency operation shortly after Massa arrived at the hospital, which also caters for the Hungarian military.

Massa remains in a medically-induced coma in intensive care but Bazso said there were good signs of a recovery. "We tried to wake him up three times so he could make contact with his family and each time we were successful," he said.

Massa's parents and his pregnant wife Anna Rafaela flew to Hungary to be at his bedside after the accident. Ferrari president Luca di Montezemolo also visited Massa and insisted no decisions would be taken over the manufacturer's direction for the rest of the season until the driver's situation was clarified.

"Our first priority is Felipe's recovery," he said. "Felipe's been an important member of the Ferrari family for many years, since he arrived as a kid, so we all hope he can come back soon.

Does safety need to be improved in Formula One?

"We don't want to wait too long for Felipe, but our first priority now is to find out about Felipe, and only at that moment will we take a decision."

It was a spring that had worked loose on compatriot Barrichello's car that hit Massa on his helmet, causing his injuries and subsequent crash into a tire barrier.

The crash came less than a week after Formula Two driver Henry Surtees, the son of former world champion John Surtees, was killed in similar circumstances, knocked unconscious by a tire which flew off another car in a race at Brands Hatch in England, before crashing.

Formula One's safety record has improved dramatically in recent years, with the last fatality in 1994 when the legendary Brazilian Ayrton Senna crashed at Imola.