(CNN) -- Serbia's Milorad Cavic erased Michael Phelps' 100m fly mark from the world record books as he bids to take revenge on the American for defeat in the Beijing Olympics last year. 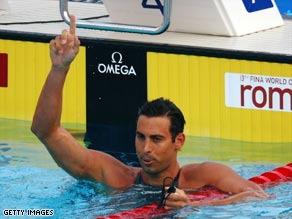 Cavic looked in supreme form in the semifinals of the 100m fly in Rome.

Cavic saw Phelps clock 50.48 seconds in the first semifinal of the event at this year's world championships in Rome then proceeded to lay down the marker in the second semi.

He finished on his own in 50.01 seconds, well inside the mark of 50.22 which Phelps set earlier this month in Indianapolis.

In last year's Olympics, Phelps beat Cavic in a fingertip finish to the 100m fly, with the Serbian still convinced he touched first but did not hit the timing pad hard enough.

It was the closest of the American superstar's eight gold medals, but Cavic is thirsting for revenge in Saturday's final.

Phelps won his third gold of the championships as he led off the U.S. 4x200 freestyle relay squad which won in a world record time of six minutes 58.55, beating their mark set in Beijing.

Lochte was also a member of the golden relay team as his successful championship continued.

Their American teammate Aaron Peirsol earlier triumphed as he regained the 200m backstroke title as he smashed his own world record.

Peirsol, who made a schoolboy error to miss out on the 100m backstroke final, made no mistake this time with a one minute 51.92 second clocking to take over a second off the mark he set at the U.S. championships in Indianapolis.

The world record breaking continued ahead of the ban next year on high-tech bodysuits, with four going in the first three events of Friday night.

Germany's Britta Steffen broke her own record in the 100m freestyle final at 52.07 seconds with Britain's Fran Halsall claimed the silver.