(CNN) -- Michael Phelps on Sunday claimed his fifth gold medal as the U.S. 4x100m medley squad fittingly rounded off a remarkable eight days of competition at the Foro Italico with the 43rd world record. 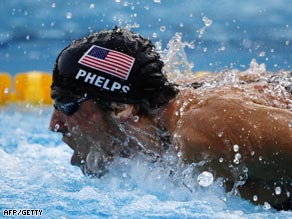 Phelps swaw a superb fly leg for the U.S. as they broke the world record.

Phelps had produced the probably the performance of these world championships in claiming the 100-meter butterfly crown in a new world record on Saturday.

He showed his brilliance in the fly discipline again by giving the United States an unassailable lead as they smashed their Beijing Olympic mark with a three minutes 27.28 seconds clocking. Testicular cancer survivor Eric Shanteau, Aaron Peirsol and David Walters were the other team members.

Phelps, who entered the record books with eight gold medals in Beijing, showed his motivation was still strong in Rome, despite competing without the high-tech polyurethane swim suit which has caused such a stir.

World governing body FINA have said the suits will be banned from the beginning of next year, but their impact on the record books will remain for some time with marks continuing to be shattered on Sunday.

Britain's Liam Tancock started the record spree by breaking his own record to win the 50 backstroke as he touched in 24.04 seconds.

Russia's Yuliya Efimova made it world record number two of the session when she edged American Rebecca Soni in the 50-meter breaststroke to win in 30.09 seconds.

Germany's Britta Steffen then completed the 100-50 freestyle sprint double with a 23.73 clocking to beat Sweden's Therese Alshammar, who went under the old record as well in 23.88.

Ryan Lochte won his fourth gold of the meet in the 400m individual medley, but way outside the world record of teammate Phelps who sat out the event in Rome.

Tunisia's Ous Mellouli matched his Olympic heroics by winning the 1500m freestyle, but could not get inside Australian Grant Hackett's eight-year old world record for the longest event in the pool.

The world record also survived in he women's 400m individual medley which was won by Hungary's Katinka Hosszu in four minutes 30.31 seconds.