(CNN) -- Michael Schumacher will not be able to test for Ferrari ahead of his F1 comeback after the rival Williams team refused to give permission. 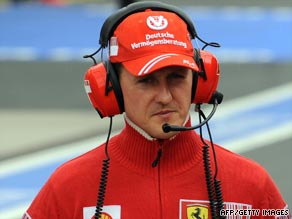 Schumacher will make a dramatic return at the European Grand Prix.

The 40-year-old Schumacher has been drafted in as a replacement for the stricken Felipe Massa and wanted to be granted a day at the wheel of the Ferrari F60 before the European Grand Prix at Valencia in three weeks time.

Testing is banned during the season so Ferrari wrote to the nine other Formula One teams to request permission for the seven-time champion to be given special dispensation.

But Williams took an opposing view and pointed out to the precedent of 19-year-old rookie Jaime Alguersuari who had to race for Toro Rosso in Hungary without any testing practice.

"While we welcome Michael Schumacher back to Formula One, the fact is any form of in-season circuit testing is strictly prohibited, a regulation clearly laid out by the FIA and adhered to by all of the teams," said Williams in a statement.

"It was for this reason Alguersuari, who drove an F1 car for the first time in Hungary, did not have the opportunity to familiarize himself with the Toro Rosso before he made his race debut.

"Williams sees no distinction between Alguersuari's situation and Schumacher's and feels any deviation from the rule would create a precedent for the future."

Williams also pointed out that Ferrari chose Schumacher over current test drivers Luca Badoer and Marc Gene, who are both familiar with the team's 2009 model.

"In a similar situation, Williams would unhesitatingly use its current test driver," added Williams. "For the sake of consistency and fairness, therefore, we oppose Ferrari's proposal to test ahead of the European Grand Prix."

Schumacher did have time behind the wheel of the 2007 Ferrari in private testing at Maranello over the weekend, but due to the pace of technological change in F1 it will be of limited benefit.

Massa left hospital in Hungary on Monday after a freak accident left him with a fractured skull. He said he hopes to return to F1 as soon as possible, but no timeframe has been set for his comeback.