(CNN) -- Michael Schumacher's comeback to Formula One later this month has been placed into doubt because of a lingering neck injury. 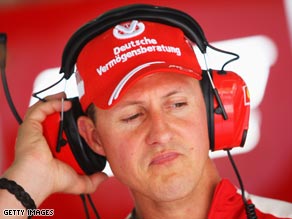 Schumacher is hoping to make his Ferrari return in the European Grand Prix on August 23.

The seven-time world champion is due to replace stricken Ferrari driver Felipe Massa in the European Grand Prix in Valencia later this month, but his spokesperson Sabine Kehm told ZDF television in Germany that the injury could wreck his return.

"He's still not absolutely certain that his neck will hold up. His return depends on medical examinations which have yet to take place. Only after these tests will it be clear if he can drive," Kehm was quoted on the station's official Web site www.zdf.de.

"Michael is 100 per cent committed to his return," added Kehm, who is regarded as one of Schumacher's inner circle.

Schumacher himself flagged up the problem on his own personal Web site www.michaelschumacher.de.

"All in all, the training is going pretty well, although I have to admit my neck pinches a bit,

"We have to get a grip on that as health has priority. That's the clear arrangement made with Ferrari and, by the way, with my wife (Corinna), too."

The 40-year-old picked up the injury in a motorcycle spill in February and he was troubled by the niggle while testing the 2007 Ferrari last weekend.

Schumacher revealed that he had already lost three kilograms in weight as he steps up preparations for the August 23 race and had been overwhelmed with the support he had received from fans.

"It's incredible how much support I have been getting from all over the world. It feels as if a flush of positive energy is coming over me.

"I accepted the challenge and as you all know I love challenges. It seems as if my fans love them too."

Meanwhile, Massa is on the road to recovery after returning to his native Brazil following his horror crash in qualifying for the Hungarian Grand Prix.

The 28-year-old was checked over at a hospital in Sao Paolo and told he did not require any further surgery after fracturing his skull in the 200kph crash.

"Felipe has had a remarkable recovery," said his personal doctor Dino Altmann.

Massa is expected to miss at least four races and possibly the rest of the season with Schumacher his replacement if he passes the required medical tests.